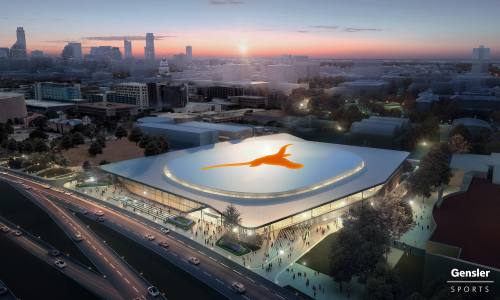 The University of Texas moved forward with a plan to build a new arena that will be home to its men's and women's basketball teams.

Plans to replace the Frank Erwin Center with a new arena for the University of Texas basketball teams took another step forward Thursday when the university system's board of regents approved a lease agreement with Oak View Group, LLC, the group that will build and operate the new facility on campus.

The new arena will replace the Frank Erwin Center, which has served as the home to UT's basketball teams since 1977.

UT President Gregory Fenves said on Dec. 20 the Erwin Center has been "a wonderful location for our two basketball teams and events over the past four decades, but it is now obsolete and we're looking to replace it with a modern arena."

According to a university press release, the new $338 million arena is schedule to open in 2021 and will not be built with any university or public money. The arena is set to host 10,000 fans for basketball games, with the ability to expand its capacity to 15,000 for concerts and shows.

Actor Matthew McConaughey, a 1993 UT graduate, is a part of the group led by OVG that will partner with UT to build the arena. That group also includes entertainment companies Live Nation and C3 Presents. As "minister of culture," McConaughey will help create the fan experience.

UT issued a formal request for proposals in February regarding the project, stating at the time that the public-private partnership between the university and the developer would be "groundbreaking in college athletics."

"It's a great day for the University of Texas at Austin and the city of Austin. This has been a long-term project and I want to thank everyone who's worked so hard to make this happen," Hicks said.

The University of Texas Board of Regents is scheduled to vote Thursday on a lease agreement related to the construction of a new basketball arena to replace the Frank Erwin Center.

The board will consider a short-term ground lease for a 6.64-acre property to Oak View Group, LLC. The property where the new stadium would be located is just south of Mike A. Myers Stadium, the home of UT’s soccer and track and field programs, and the parcel is bounded by Red River Street and Robert Dedman Drive.

Among the services listed on Oak View Group’s website is “venue design, venue construction and live district development.” According to the Sports Business Journal, the company has deals in place with arenas around the country to increase event and sponsorship revenue.

UT President Gregory Fenves announced a plan in 2017 to demolish the Erwin Center and build a smaller venue on a different part of campus in order to allow for the expansion of the Dell Medical School and the UT Health District.

The Erwin Center has a capacity of 16,700 for basketball games and 17,900 for concerts. The seating capacity of the new arena has not been announced, but Fenves said it will be “smaller and more intimate” than the current Erwin Center, built in 1977 for $34 million.

The Board of Regents will meet 2 p.m. Dec. 20 on the second floor of the University of Texas System Building, located at 210 W. Seventh St. The board is scheduled to enter executive session to discuss matters including the lease agreement, before reconvening in open session for a potential vote.