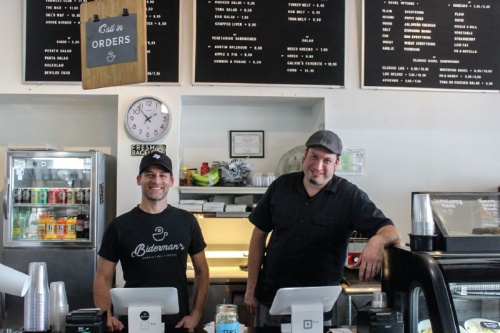 Bidermanu2019s owner Zach Biderman and his business partner Gabe Sims stand behind the counter of their Far West Boulevard location.

Zach Biderman is a lifelong Austinite.

“Originally, [our goal] was to come and fill the void of the Jewish deli in Austin because there was nothing,” Biderman said.

Rather than offering staples, such as pastrami and whitefish by the pound, the deli focuses on a “core set of Jewish items,” such as matzo balls, chopped liver, its best-selling Reuben sandwich and bagels, Biderman said.

“I did about eight runs on different recipes for bagels and got one that really worked well and worked with my pastry chef, once we hired her, to refine it,” Sims said.

Biderman’s is located in a modest strip near the local Jewish Community Center, Shalom Austin.

“Far West [Austin] is traditionally not known as the cool area where restaurants know to be,” Biderman said. “Also because it’s more of a family-oriented community, the dinner scene here is a lot slower.”

However, the deli has thrived in the neighborhood, which includes residents familiar with Jewish-style cuisine as well as office buildings with employees in need of lunch.

“This is a good niche for a business like ours,” Biderman said.

Next up for Biderman’s is a second location in downtown Austin, set to open later this month.

The decision to expand was prompted by “a lot of people asking about it” as well as a desire for more exposure, Sims said. “There’s a certain portion of the community that will never get up here [on Far West Boulevard] because it is north of [downtown] Austin.”

The second location will feature an identical menu and focus on creating a consistent client base as the original location has.

“We truly feel we are part of this community up here,” Biderman said. “I think people appreciate having that space where somebody knows them and knows what they’re going to order.”

As many locally owned restaurants in Austin struggle to stay open amid rising rent, staffing challenges and increased competition, Biderman’s is digging in.

“This is a dying genre of restaurant,” Sims said of Jewish-style delis nationwide. “We’re keeping it alive.”
SHARE THIS STORY