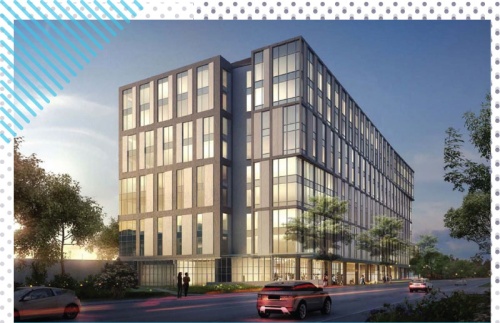 The new 9-story Health and Human Services Commission building will stand at the corner of W. Guadalupe and 46th streets.

Two state development projects are underway in Central Austin, as one looks to reshape the area around the Texas Capitol and the other will erect a prominent office space along one of Austin’s most traversed corridors.

The 1-million-square-foot, $581 million first phase of the Texas Capitol Complex will transform the northern gateway to the capitol with two new office buildings, five levels of underground parking and a pedestrian-oriented public mall replacing a section of Congress Avenue.

The new Texas Health and Human Services Commission office—a new nine-story building paired with a seven-story parking garage—will stand at the corner of West Guadalupe and 46th streets, just across from The Triangle mixed-use development.

Both projects are only the start of larger redevelopments planned by the state. However, state documents say funding for future phases has not been secured.

As the state agency responsible for maintenance and construction of facilities, the Texas Facilities Commission will oversee both projects. Richard Ehlert, director of procurement with the facilities commission, said the projects aim to consolidate the state’s office leases in the Austin area into new state-owned buildings, which he says will save taxpayers millions of dollars in annual lease expenses.

The Texas Capitol stands 20 feet taller than the United States Capitol and receives thousands of visitors each year.

Positioned between Austin’s busy downtown and the University of Texas campus, the Texas Capitol Complex’s future identity is a pedestrian-friendly event space.

In the first phase, a tree-lined, grassy public mall will replace Congress Avenue from Martin Luther King Boulevard to 16th Street. A future phase will expand the mall to 15th Street. Stretching from the Bullock Texas State History Museum to what is now the entrance to the Capitol, the mall will be split into four sections by traffic on 18th, 17th, 16th and 15th streets. Each section will be available to host simultaneous events.

Opposite from both the Bullock museum and Blanton Museum of Art, the 14-story, 603,000-square-foot George H. W. Bush Building will take over the surface level parking lot at 1801 Congress Ave. The new state office building will include display and performance spaces, a cafe and food service on the first floor. Pairing with the two museums, the Bush building’s first floor will create what the state calls the “Museum Plaza,” serving as a cultural gateway to the Capitol. The Texas Lottery Commission is the only tenant named thus far.

Just south at 1601 Congress Ave., a new, unnamed, 12-story, 416,000-square-foot office building will include a state childcare facility. No other tenants have been named.

Ehlert said the parking garage and mall are expected to be ready by May 2022, with the two office buildings opening by late 2021.

Five miles north, the area around the John H. Winters Health and Human Services Building at 701 W. 51st Street is evolving, as well.

Work began on the 406,000-square-foot, nine-story office building and seven-story parking garage at the corner of 46th and West Guadalupe streets in June. The structures should open by May 2021, and according to the state, save taxpayers $7.4 million in lease expenses.

This is phase one of a more than 700,000-square-foot, $445 million plan to build the North Austin Complex. Funding for the future phases, which include more office space and parking, will be proposed during the upcoming legislative session beginning in January 2019.
SHARE THIS STORY