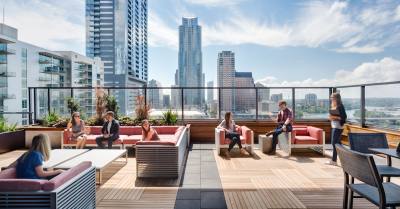 A new downtown office tower, which will be anchored by Google, debuted Aug. 17.

One of the world's largest companies is set for a move downtown.

Google Inc. will anchor the new 500 W. Second St. tower that debuts today at a grand opening celebration for the 29-story, 500,500-square-foot facility.

Trammell Crow Company and Principal Real Estate Investors, which developed the project, said in a news release it is the greenest and most technologically advanced office building in the city.

“Our goal, from the outset, was to design a building that would help attract, and then retain ’big-time’ tech companies and other global leaders,” said Todd Runkle, principal and managing director of architecture firm Gensler’s Austin office. “It’s thrilling to reach the grand opening knowing that compelling design was crucial to achieving that goal.”

The top of the building is set to be adorned with a large G to indicate its main tenant, Google.

The technology giant has more than 450 employees in Austin. Google's existing facilities are in Northwest Austin at 9606 N. MoPac, Ste. 110, Austin.

The four-block redevelopment project includes the Northshore residential tower, the upcoming Austin Proper hotel and condominiums. It is estimated the redevelopment will add $500 million to the city's tax rolls, according to a news release.