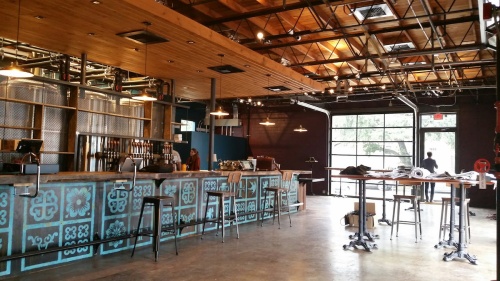 The Brewtorium has finally found a home, and Lazarus Brewing Co. plans a soft opening next week. The Brewtorium owners Chris Rauschuber (left) and Whitney Roberts plan to open their brewery in North Central Austin this summer.[/caption]

After nearly two years of searching, The Brewtorium—a casual neighborhood brewpub—has found a spot at 6015 Dillard Circle, Ste. A, Austin.

The Brewtorium co-owners Whitney Roberts and Chris Rauschuber said Friday they would like to open sometime this summer.

Described as a cozy pub-meets-beer hall atmosphere with multiple styles of seating, views into the brewery and a beer garden, the establishment will consist of 15,491 square feet that holds the 15-barrel brewery, two private event spaces and a kitchen.

Roberts said she planned to use about 10,500 square feet and sublet the back of the building for the next several years with options to expand into that space, if necessary.

"We're thrilled to be calling the Highland/Skyview neighborhood home with a goal of creating a welcoming and casual brewpub for our neighbors and all of Austin to enjoy," Roberts said.

The brewery also comes with plenty of car and bike parking.

Roberts and Rauschuber plan to do demolition work inside the 1960 orange brick warehouse and begin construction early next year.


Lazarus Brewing Co. to open to the public on Christmas Eve The event runs from 10 a.m. to midnight. Lazarus' kitchen will also be open and serving Mexican food.

The brewery is kid-friendly and dog-friendly.

Lazarus Brewing Company, located at 1902 E. Sixth St., Austin, passed its final building inspection Friday and is currently training its employees and putting the final touches on the taproom.

The brewery, which was originally slated to open in November, will be a West Coast-style brewpub that also serves coffee and tacos.

Lazarus' first day of operation is Dec. 24 from 10 a.m. to midnight. The business is also planning a grand opening celebration in early January.

The brewery is known for its Free Beer For Life program, which—as the name suggests—offers free beer for life to anyone who purchases one of its $1,000 Patron Saint glasses.

This article has been edited to show The Brewtorium will not be demolishing the building as previously reported.