Austin City Council is weighing several changes to development rules along major roads in the city as officials continue to seek out agreed-upon ways to address the affordability crisis.

During a May 17 work session, council zeroed in on the topic of boosting housing capacity along some of Austin's more heavily trafficked corridors, such as highways or roads that will carry Project Connect rail lines. Officials are looking at this plan as a consensus point in ongoing housing talks, after years of work on a broader rewrite of the city's land development code produced more disagreement among members and residents—and eventually stalled out.

“As a council, when we focus really on the problem and are able to have the conversations and hear from one another about what our concerns are, what the dynamics are in our districts, what we know from the many, many conversations we’ve had across the city over the years, I think we can get to results that can move the needle on the things that we all agree on," Mayor Pro Tem Alison Alter said.

Several proposals tied to development along Austin's corridors were presented by a subgroup of council members as a first step toward a final policy update. As laid out by Alter, Mayor Steve Adler and council members Vanessa Fuentes, Leslie Pool and Paige Ellis, the potential updates could reduce the influence of compatibility rules and parking requirements on new construction. Loosening some compatibility restrictions, set in Austin's land development code to protect residential areas by prohibiting taller construction, could allow for larger projects in areas officials would like to see more of such growth.

The group of five council members said they drafted their plan to aim at Austin's "larger" corridors—roads with current and future Project Connect rail lines and current bus routes, as well as highways—and "medium" corridors, including existing Imagine Austin roadways and streets targeted for improvements through 2016 mobility bond funding.

Around three dozen streets in those networks could be removed from council's discussions given other concerns or considerations. Roads that may not qualify include portions of East 11th and East 12th streets, Enfield Road, Exposition Boulevard, Oltorf Street, Montopolis Drive and St. Johns Avenue.

“If you want to add density to corridors ... the first step is to define ‘what is a corridor’ and to understand that maybe not every corridor is created equally," Alter said. 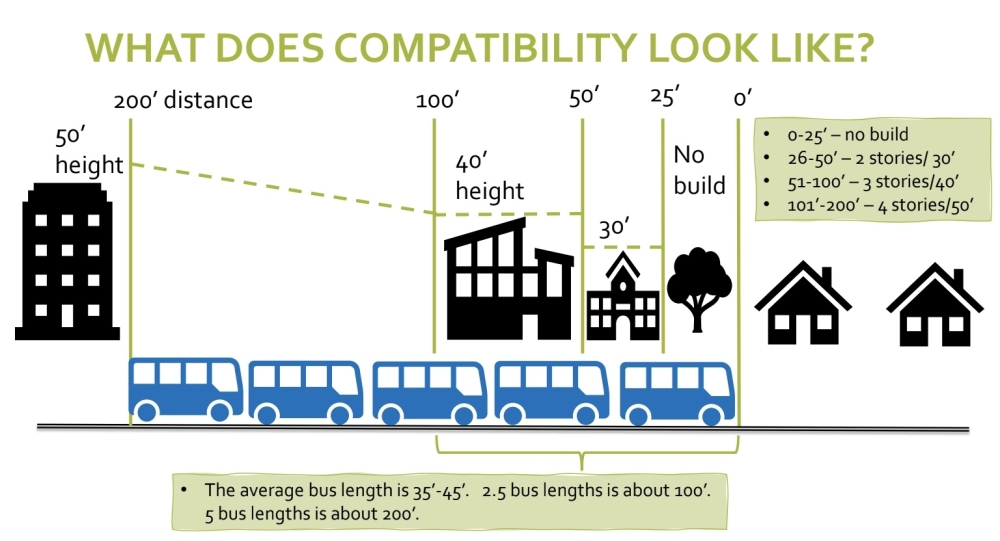 Austin's compatibility standards affect the scope of development near existing residential areas and were implemented in part to protect the character of older homes and neighborhoods from projects deemed to be incompatible with them. Changes proposed by the subgroup would limit the reach of some compatibility triggers in an effort to allow larger projects in places where council has agreed that such density should be placed. 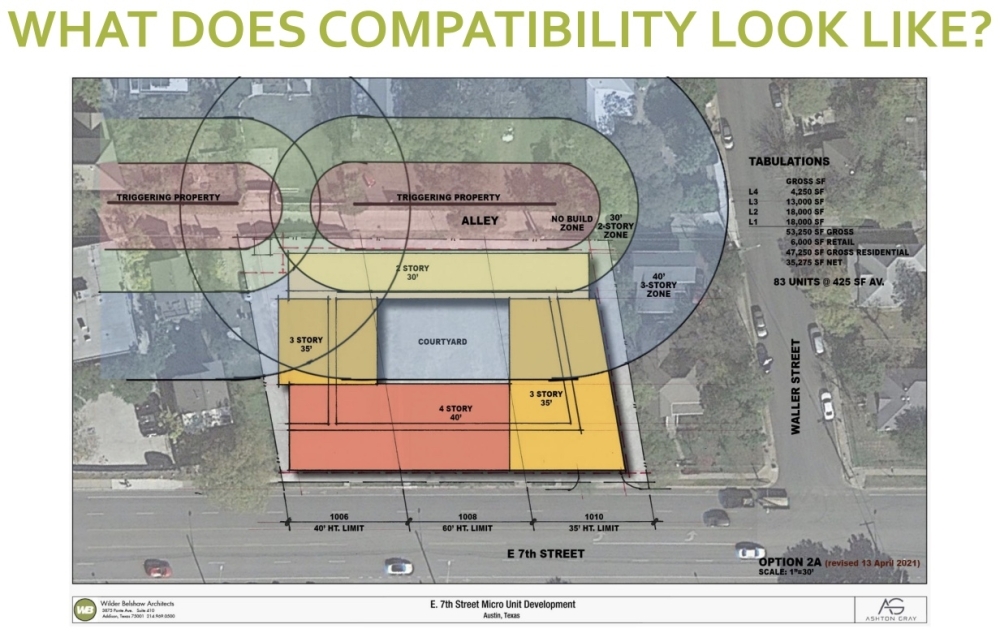 Other ideas floated by the council members concern more exact distances involved in compatibility regulations. Among those is a cap on the influence of compatibility farther away from a residential home.

Austin currently allows compatibility to trigger as far away as 540 feet from an existing property, identified as a much higher figure than any comparable city that council members reviewed. A change could reduce that number to 300 feet, although Adler noted that extent is still more than the "farthest limit" of other large cities. In comparison, similar limits in Dallas and San Antonio reach only 50 feet from target properties.

Another slight tweak could increase the permitted height of new buildings going up closer to residences. The proposal would grant denser developments an additional 5 feet of height beginning at 100 feet from single-family zoned properties on "larger" corridors and 150 feet away on "medium" corridors. Alter said, while not representing a significant change in building height, the new allowance could open the door for developers to skip over one- or two-story plans to build upwards with more housing.

"If you can go from one [story] to three or one to four, you’ll see more incentives to have the construction. Those can be local developers ... and so it creates a little bit more opportunity for that construction to take place," she said. "That 5 feet difference, I think is really important for adding the density and creating incentives to have that where we want it.”

No action on the changes is expected in the immediate future as officials continue to consider the options and open the door to community feedback. In the near-term, council will plan to vote on an expansion of the city's vertical mixed-use, or VMU, affordability program. Also centered on main corridors, the VMU2 concept has surfaced at council meetings several times in recent months and could be finalized by mid-June with more "aggressive" affordability standards, Kitchen said May 17. More discussion of both items is scheduled for council's May 19 meeting.

Two VMU2 amendments brought by District 4 Council Member Chito Vela would also reduce compatibility limits on the height of VMU projects and eliminate any requirements to build parking spaces for those buildings. Vela said he hopes to see council push along the VMU2 update and code amendments from the broader corridor talks "as soon as we possibly can." Vela also requested a deeper dive into development-related data to ensure that any changes made by council do end up producing more housing.

"Instead of arbitrarily picking compatibility distances, we should understand how much we are actually increasing housing capacity along those corridors. Austin's compatibility limits are so strict that even a substantial reduction in compatibility requirements may have very limited effect on the ability to build housing along our corridors," Vela wrote on council's message board.

During the work session, council members also said more review of the targeted roadways and the extent of possible changes is needed before the concepts are brought to a vote. District 1 Council Member Natasha Harper-Madison expressed concern over a "severe inequitable distribution" of some roadways not included in the initial plan, especially in more affluent parts of town. Kitchen and others also asked to take more time to review which roads were selected and should be supported as sites for denser development.

Regardless of what shape any final code updates take, officials seemed to be in agreement that the proposals laid out this month are needed and something council can work toward passing this year after more consideration.

“This is an opportunity to do something, because we desperately need something. I’m losing all my friends, and they’re all having to move out," District 3 Council Member Pio Renteria said. "There is no place in Austin that is affordable.”