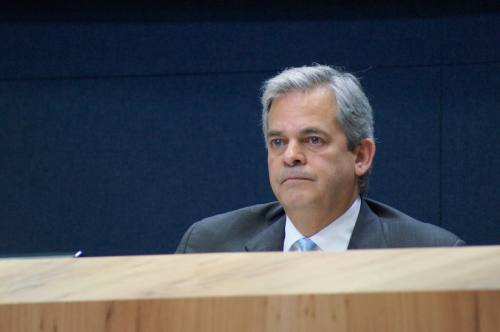 Austin Mayor Steve Adler said he sees Texas Gov. Greg Abbott’s letter, threatening state intervention if the city fails to improve its homelessness situation by November, as a welcomed opportunity for a city-state partnership to address a problem that desperately needs attention.

In his Oct. 2 letter to Adler, Abbott said if Austin did not show “consequential improvement” in fixing its homelessness problem by Nov. 1, he would have “no choice other than to use the tools available to the State of Texas” to address concerns raised surrounding Austin’s “homelessness policies.” The letter comes as awareness continues to heighten around homelessness in Austin since the city in June decriminalized public camping, sitting and lying down—bans on which critics said unfairly targeted the homeless population.

“There are some people who read the letter as a threat,” Adler said at a news conference Oct. 2. “I understand the seriousness of this letter, but I choose to read this letter as an offer of assistance. Ending homelessness would be easier and would happen more rapidly if we have the state’s support.”

The mayor said he understood the “angst and concern” that precipitated the letter, but that Austin has done more than ever to address its homelessness problem. He said heightened visibility since City Council’s June decision is a positive for the progress of the problem, and putting the issue at center stage is an important step in conquering it. Adler said Austin did not effectively end veteran homelessness by hiding the veterans.

“We [ended veteran homelessness] by writing down their names and one person at a time figuring out that the person needed,” Adler said. “When Austin moves our most vulnerable Texans to where we can’t see them, I pray that we have helped move them into housing.”

District 4 Council Member Greg Casar was less accepting of Abbott’s letter. In a statement released Oct. 2, Casar criticized the governor for his own inaction.

“The governor is choosing not to help, and instead is threatening martial-law-style interventions, in a move right out of the Trump playbook,” Casar wrote. “Instead of threats, I hope the governor actually steps up and helps. Austin is done running away from homelessness. The state government could help, instead of continuing to fail us.”

“It’s indefensible to be throwing stones, Governor,” Pool wrote. “How about helping your constituents instead of taking potshots at us?”