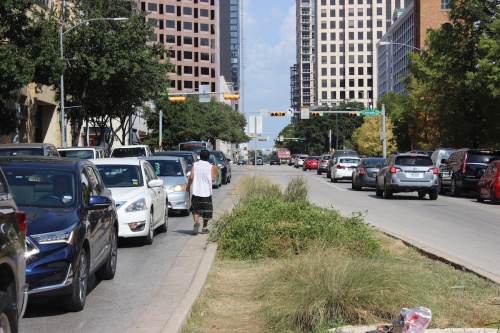 A man experiencing homelessness in downtown Austin asks for help.

In a scathing letter to Austin Mayor Steve Adler, Texas Gov. Greg Abbott called for the capital city to show “consequential improvement” in its homelessness crisis by Nov. 1 and threatened state intervention should the city not meet the governor’s demand.

Abbott charged the mayor and City Council with thus far failing to maintain “the welfare, health, morals, comfort, safety and convenience” of Austin residents through their “inaction” to address the city’s growing homelessness issue. Abbott cited “news reports” that said businesses have struggled to keep people from sleeping on sidewalks, increased homeless encampments have made city roads unsafe, and “feces and used needles have … started accumulating at alarming rates.”

“As the Governor of Texas, I have the responsibility to protect the health and safety of all Texans, including Austin residents,” Abbott said. “Further inaction by you and the Austin City Council will leave me no choice other than to use the tools available to the State of Texas to ensure that people are protected from health and safety concerns caused by Austin’s homelessness policies.”

Homelessness has been a hot-button issue in Austin throughout 2019, but the situation reached a fever pitch after City Council voted June 20 to decriminalize public camping, sitting and lying down—bans on which critics said unfairly criminalized the status of homeless people. Although the city received praise from civil rights advocates, the decision also caused an outcry from residents across the community.

The governor’s office has not responded to requests from Community Impact Newspaper to clarify what meets the threshold for “consequential improvement.” However, he listed a variety of ways the state could intervene if the city fails to meet his Nov. 1 deadline. He emphasized the following is only a “sampling—not an exhaustive list.”

The mayor’s office was unable to provide comment by press time.

This is a developing story.