Terra Toys keeps focus on the classics for four decades 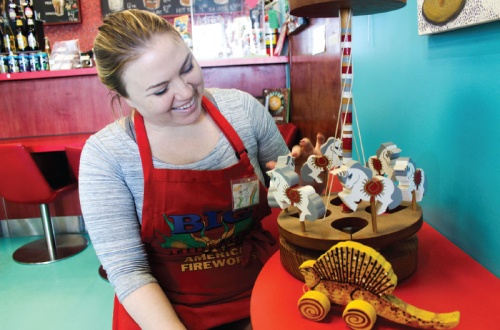 From the back office of Terra Toys, store General Manager Sylvia Allsup-Edwards takes two toys off the shelf. One is a wooden carousel with horses connected to the spinning wheel by wooden pegs. The other is what Allsup-Edwards calls a “wobbly monster,” a dinosaur-looking creature on oblong wheels that make the monster move up and down when a child pulls it along the ground.

There are toys of all shapes and sizes lining the walls of Terra Toys, but these two are not for sale. These were two original toys made with a bandsaw and a block of wood by Allsup-Edwards’ parents, Romalda Allsup and Charles Edwards, when they opened the original Terra Toys on South Congress Avenue in 1979.

“They handmade this, hand-carved and hand-sanded it, and Romalda hand-painted the little unicorns,” Allsup-Edwards said.

The original store on South Congress was about 200 square feet, according to Allsup-Edwards. Her parents had originally started selling snow cones on the Drag but realized they needed a new business in the winter. With a bandsaw and some scrap wood, Edwards made toys that Allsup painted.

“They definitely don’t like having a boss, so they created a work environment where they were their own bosses,” Allsup-Edwards said.

The family lived in the back of the store, and a midwife delivered Allsup-Edwards and her sisters in the same building. In 2004, the store moved to Anderson Lane. This fall, Terra Toys will celebrate its 40th anniversary.

Allsup-Edwards started full-time at the store in 2010 and manages many of the day-to-day responsibilities, although her parents are still very much involved in the business.

Today’s Terra Toys has changed from its original small store. The spot has expanded multiple times and now has 15,000 square feet of bubbles, hula hoops, dolls, books and more. Despite the time that has passed and the changes the store has been through, Allsup-Edwards said the philosophy is the same as it was when her parents handcrafted the original toys in 1979: focus on classic, fun and beautiful toys.

“We’re trying to really come back to the roots of what play is,” she said.