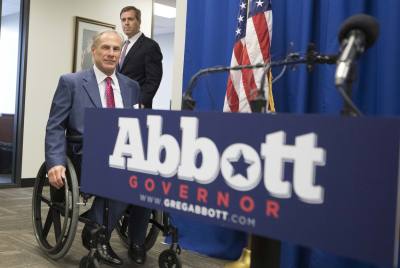 Gov. Greg Abbott on Tuesday unveiled a plan to "rein in skyrocketing property taxes" in Texas, looking to lay down a marker in a debate that dominated the legislative sessions last year and promises to remain front and center through the 2018 primaries and his re-election campaign.

"Enough is enough," Abbott said at a news conference flanked by Republican Lt. Gov. Dan Patrick and several lawmakers. "Texans are fed up with property taxes being raised with impunity. They are tired of endless government spending while honest, hard-working people struggle just to keep up with paying their tax bills. We can no longer sit idly by while homeowners are reduced to tenants of their very own property with taxing authorities playing the role of landlord."

A key tenet of Abbott’s proposal is to prevent cities, counties and school districts from collecting more than 2.5 percent more in property tax revenue than they did in the previous year without voter approval. That’s a far lower cap than controversial thresholds that twice failed to make it through the Legislature last year. And his plan would require that two-thirds of voters — well beyond a simple majority — approve any increase above that 2.5 percent threshold.

But Abbott’s plan also offers local leaders something last year’s property tax overhauls didn’t. The state would no longer be able to saddle local governments with providing new services without providing state funding to cover the costs, he said. And when it comes to funding public education — which makes up the majority of local property tax bills — Texas lawmakers would likely be required to put up more state funds under Abbott’s proposal.

At the news conference, Abbott acknowledged that the Legislature might need to pass a school finance reform package as a precursor to his tax proposal, pointing to his successful push last year for the creation of the Texas Commission on Public School Finance. The panel is expected to report its findings to the governor and the Legislature by the end of this year.

The governor’s plan would also subject school districts to the same revenue caps as cities and counties, which is almost certain to be controversial.

While the plan would slow increases in how much money local governments collectively take in, it wouldn’t necessarily lower individual property tax bills. The amount of money a landowner must pay each year is not just tied to the tax rates that local governments set. It is also determined by the appraised value of the land and any buildings on it. So a city could lower its tax rate and a homeowner could still pay more in property taxes than a previous year if the owner's assessed values have gone up.

The cap in Abbott’s plan wouldn’t be applied to either the tax rate or the increase in appraised value -- it would only pertain to the total amount of money a local government collects on existing land and buildings.

Current law allows voters to weigh in on increased property tax revenues that cities, counties and special purpose districts collect. But that only happens if revenues increase 8 percent or more — and voters collect enough signatures to force an election.

It’s still unclear how much luck Abbott will have with lawmakers who return to Austin next year. Similar property tax overhauls failed amid an intra-Republican party war between the Senate and House last year, with members of each chamber blaming the other for the failures. But the lower chamber next year will have a new leader since House Speaker Joe Straus, R-San Antonio — often cast as the chief obstructor of Abbott and Republican Lt. Gov. Dan Patrick’s agenda — is not seeking another term.

"Frankly, I think it will be easy to get it through both the House and Senate because taxpayers in the state of Texas are frustrated," Abbott told reporters. "Every member of the House is running for election right now. Every member of the House is hearing they need to do something to constrain property taxes in Texas, and so I know when everyone comes back to the Capitol, they understand they have to do something."

Patrick, meanwhile, cited the pending change in House leadership as a possible catalyst for a property tax bill.

"It is my hope that leadership in House next session understands that we're not going to wait any longer for real property tax reform and relief and that we'll have a partner to get this done," Patrick said, later telling reporters he hopes a commitment to reducing property taxes is "one of the prerequisites before House members" vote on their next leader.

The proposal is also expected to ignite anger from local leaders, who say state officials in recent years have overstepped their bounds and tried to control how cities, counties and school districts operate. In Texas, only local governments are allowed to collect property taxes. The state is largely funded by sales taxes. Texas is among seven states that don't have a state income tax.

"Like the failed legislation from the 2017 regular and special Texas legislative sessions but worse, the Governor's misguided proposal suggests that he doesn’t trust Texans to make the best decisions for our communities," said Ann Beeson, the executive director of the Center for Public Policy Priorities, a left-leaning Austin-based think tank.

"If Governor Abbott is really concerned about property taxes, then he should join the business leaders and other Texans calling for more state investment in public schools," Beeson added. "Cuts to state funding of public education have meant more reliance on property taxes as well as crowded classrooms and worse teacher retention."

But Abbott’s attempt could resonate with voters. More than three-fourths of voters in a University of Texas/Texas Tribune poll last year supported limits to local property tax increases. And while rising property taxes are unpopular, Texans still have one of the lowest state and local tax burdens in the country, according to the Tax Foundation, an independent nonprofit that researches taxes.

An analysis by that organization for 2012, the most recent year available, found that Texans must spend about 7.6 percent of their income on state and local taxes compared to a national average of 9.9 percent. That would mean Texans have the fifth lowest tax-to-income ratio when it comes to state and local taxes.

Abbott was joined at the news conference by David Garcia, a Houston resident who said he has seen his property taxes rise 45 percent in the past four years. A group of Republican legislators from the region were also at the news conference, including state Sens. Paul Bettencourt and Joan Huffman, as well as state Reps. Dennis Bonnen — the chairman of the House Ways and Means Committee — Mike Schofield and Jim Murphy.

The governor had been set to tour the state Tuesday to promote the plan, but inclement weather caused him to relocate the Houston news conference — it was originally scheduled to take place at a local taxpayer's home — and postpone an afternoon stop in Arlington. The Arlington event was moved to Wednesday.

Disclosure: The Center for Public Policy Priorities has been a financial supporter of The Texas Tribune. A complete list of Tribune donors and sponsors is available here.