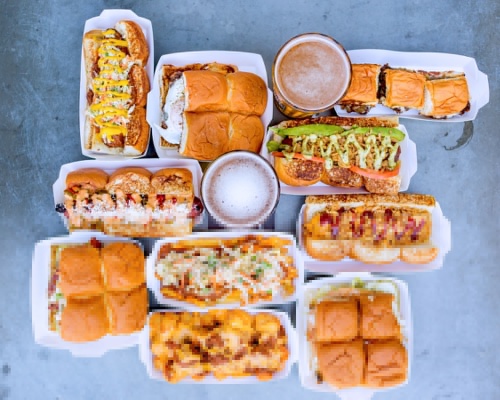 Dog Haus Biergarten’s tagline is “the absolute wurst,” which is a far cry from the reputation it has earned since opening in August 2017. Its owner, Ron Ryan, has woven Dog Haus into the fabric of the local dining scene by serving gourmet hot dogs with a side of community service.

He said he chose Richardson Restaurant Park for Dog Haus because of its optimal visibility to motorists on US 75. And while the business does attract passersby, its bun-and-butter customers are young families and professionals living and working in Richardson.

“There is a real sense of civic pride [in Richardson],” he said. “If your intent is to be the fabric of the community, it’s a really good thing because once you break through, there’s a mutual admiration society.”

It also offers the Impossible Burger and Beyond Sausage on a plant-based menu tailored for vegans, vegetarians and “flexitarians,” or vegetarians who sometimes eat meat.

Since Dog Haus’ opening, Ryan has raised funds for nonprofits, such as Waterfall Academy and Richardson ISD. During the restaurant’s grand opening Ryan gave away free Haus Dogs with a minimum $1 donation to Heroes for Children, a local organization benefiting children with cancer. On its first anniversary Ryan raised another $1,100 for the organization. And as a gesture of gratitude, Ryan offers a 50 percent discount on food to all first responders.

As he forges his 2019 expansion with three more DFW locations, Ryan said he intends to always keep community service a part of his business plan.

“If you pull back the curtain, we are a franchise,” he said. “But it’s about your people and how you relate to the community. My little business may grow to between 1 and 20 restaurants, but every one of them will serve the community.”