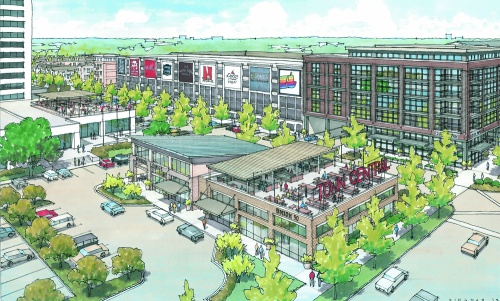 Gateway to Core Richardson is the future private development slated for Main Street and US 75.

A major renewal of Richardson’s historic downtown is about to get underway.

In April, developers and investors revealed The Richardson Core District as the new name for the Main Street area. Anchoring the revitalized downtown is Gateway to Core Richardson, a 14.5-acre development planned for the northeast corner of Main and US 75.

Developers are scheduled to break ground on Gateway by the end of July, and the city will begin its overhaul of nearby streets and infrastructure later this year.

Construction will inevitably cause delays. Still, if residents and business owners can weather the storm, developers say that by early 2022, a hip and progressive area akin to Deep Ellum or Bishop Arts will be accessible from their own backyards.

“Richardson lacks a walkable district where people can spend hours and be entertained,” said Manasseh Durkin, president of Durkin Properties, one of several private partners in the effort to revitalize Main. “Our hope is that the Core District fills that void.”

Main was once the center of urban life in Richardson, but activity moved away from the area during a period of rapid expansion in the late 20th century, said Paris Rutherford, president of Catalyst Urban Development, the team overseeing Gateway. Despite that change, the community’s nostalgia for downtown has remained.

“The community emotion for that history is still there,” he said. “There is a desire to have [downtown] redeveloped and become something new.”

The city was in the midst of building its $80 million Public Safety Complex just north of Main and Greenville Avenue in mid-2018 when Catalyst brought plans for Gateway to City Council.

It was then that the city saw an opportune moment to bring its own improvement plans to fruition, according to Deputy City Manager Don Magner.

“These were two wonderful bookends to redeveloping the Main Street area, and we thought, ‘What else can we do from the city side to be a catalyst for that redevelopment?’” he said.

Over the course of a year, the city will sink $21 million into updating about a mile’s worth of both Main and Greenville. Planned improvements include replacing pavement and traffic signals, adding new sidewalks and benches, planting trees, moving utilities underground and adding more parking.

“We wanted to set the tone with the public investment so the private investment would mimic or duplicate that,” Magner said.

But the city faced unique challenges in redeveloping the area. In particular, the presence of Main eliminated the possibility of a traditional downtown square concept, such as what is found in McKinney, Magner said.

“We had to balance the need to move traffic effectively while also creating a pedestrian-friendly, small-business-oriented experience for folks to enjoy,” he said.

To overcome that hurdle, the city opted for a tree-lined boulevard along Main from Texas Street to just past McKinney Street. All concrete and sidewalks on that stretch will be replaced, Magner said.

“We don’t know of any other downtown area that has this kind of [tree-lined boulevard] treatment,” he said.

Major street changes to Main and Greenville are also in the works. Main will be widened to include dedicated right- and left-turn lanes onto Greenville. Also, Greenville will be realigned from its current diagonal orientation to straight.

“This will really improve the flow of traffic through the intersection,” Magner said.

The northeast and northwest corners of the intersection will be enhanced by two miniparks equipped with shade trees, picnic tables and benches. The parks can also accommodate food trucks for special events, Magner said.

Most of the new retail and restaurant construction will happen in the vacant area surrounding the existing Chase building, Durkin said. Large patios, rooftop bars and public gathering space along Main can also be expected.

Durkin said he wants to see existing merchants remain and thrive. He plans to give all building facades a face-lift so they fit into a coordinated theme.

“Deep Ellum, Lower Greenville and Bishop Arts all have a unique theme that makes them special destinations,” he said. “We are hoping that the Core District becomes one of these places…”

The Gateway development will comprise ground-level retail and restaurants. The residential portion is set to bring 340 apartments and 90 townhomes to the area as well as around 1,000 new residents, Rutherford said.

Many business owners along Main agree the revitalization project is long overdue. Still, some worry they will eventually be forced out.

“The only thing that scares me a little bit is are they just going to usher in all these big-time players and push all the small people out?” said Scott Ekblad Jr., a part-owner of Rallye Automotive, which relocated to Main in 2015. “That concerns me a little bit. I like more of the independent and unique shops. It makes [Main] more attractive.”

Hooks Vacuum has called Main home since 1992. Owners Sylvester and Anna Hooks say they hope developers maintain a high standard for which businesses to include to the area.

“The businesses they keep should be progressive rather than some that degrade the Main Street area,” Anna Hooks said.

Annie Holland, owner of Lone Chimney Mercantile, said she expects the project to bring new people to the area, which she called a win for all residents and business owners.

“Maybe people will stop saying ‘I don’t go north of I-635’ and realize this neck of the woods is in fact pretty awesome,” she said.