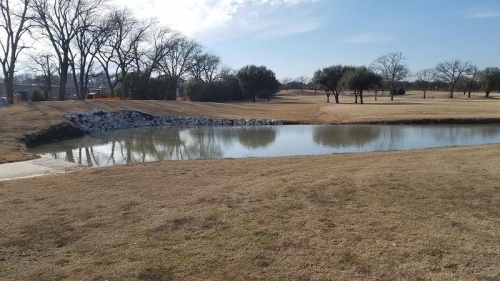 The Club at Los Rios golf course is expected to be converted to park space by 2019.

The sprawling green space that is the site of the The Club at Los Rios golf course is expected to be converted into new park space beginning in 2019 as part of a project that should last into 2020, a city spokesperson said.

The city of Plano’s Parks and Recreation Department has been soliciting feedback from Plano residents to determine the future use of the park, which will be called the Rowlett Creek Greenbelt Park. As of this paper’s print deadline, the feedback period was expected to close March 21.

While the public’s input will inform the city’s concept for the park, the department plans to include trails with seating areas and possibly restrooms and a playground area, senior park planner Renee Jordan said.

The park will also serve as a link between other existing city trails.

The city acquired the land that The Club at Los Rios sits on in 2014 using Collin County grant money.

City spokesperson Steve Stoler said in an email that Schramm’s lease term will end in October 2019.

“While the term may be extended by one additional one-year option, we do not plan to pursue that,” Stoler said in the email. “We do envision that we would get underway with a conversion to the park use in late 2019-early 2020.”

The department will present the survey results to the public from 6 to 8 p.m. on April 10 in the Northbrook Room at the Plano Event Center, 2000 E. Spring Creek Parkway.

Editors note: This story was updated to include comments from the city and the operator of the golf course.