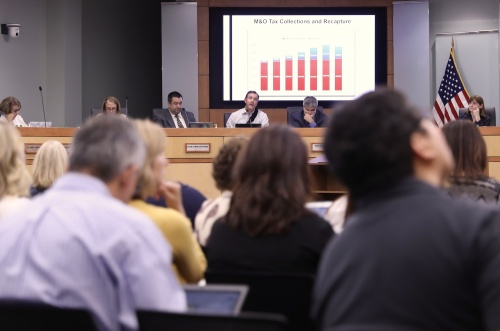 Randy McDowell, Chief Financial Officer, presented on the tax rate for the 2019-20 fiscal year at the Plano ISD board meeting Sept. 3.

The Plano ISD board of trustees adopted a tax rate for the 2019-20 fiscal year at its regular meeting Sept. 3.

This will be the lowest tax rate since 2010, according to Chief Financial Officer Randy McDowell. PISD also has the second-to-lowest tax rate in comparison to 10 other area school districts, McDowell said.

"Last year the $1.439 was costing average residents $5,140 in school taxes," McDowell said. “That number is down even though the values have gone up on the homes."

“Bond rates are very low as you know, so that is working to our advantage,” McDowell said.

House Bill 3 had a role in lowering the tax rate for this year, as it required many districts to compress their maintenance and operation rates to $0.97. The district's property tax is based on the M&O and interest and sinking (I&S) tax rate. These two make up the proposed tax rate.

Another rate is the effective rate, which is the rate needed to produce the same amount of taxes as the previous year from properties tax roll both years. There was little guidance on how to calculate this tax rate due to HB 3’s implementation, McDowell said.

“So some of the tax rates, as we know, it gets real confusing on tax rate and language,” McDowell said.”It got more confusing this year with the implementation of House Bill 3. We were required to still calculate the effective tax rate.”

PISD adopted its amended budget for the 2019-20 school year Aug. 7. The recapture tax will likely be lower due to the tax rate compression, McDowell said. Recapture, also referred to as Robin Hood, is a finance tool in which the state redistributes tax revenue from property-wealthy school districts to districts with lower property values.