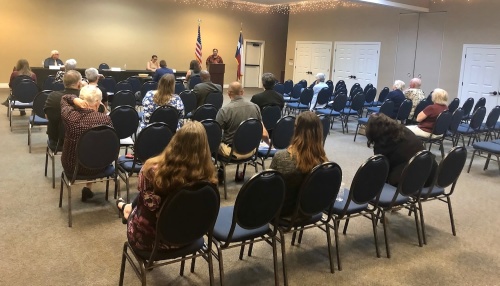 Three candidates vying for the District 1 seat on Georgetown City Council shared their views on affordable housing, economic growth and other issues at a forum Oct. 15.

At the event hosted by the Georgetown Chamber of Commerce, each candidate was given one minute to respond to a question asked by moderator Emily Sydnor, an assistant professor at Southwestern University.

'Why do you want to serve on Georgetown City Council?'

Alex Fuller said as a 20-year Georgetown resident that resides in a historic home, he is interested in the preservation of neighborhoods—not just old town, but all neighborhoods.

“I have some time now; I’m semiretired,” he said. “I have spent four years on the planning and zoning commission. I’m on my third year on the zoning board of adjustment and am currently the chair. I was a senior partner in a large Austin law firm and now am a solo practitioner in a small firm here.”

“Historic and neighborhood preservation; controlling the rising utility costs; and transportation issues, including public transit and traffic issues,” he listed.

Mary Calixta said as a fourth-generation Georgetown resident, she wants to serve because when she looks at District 1, she sees a lot of people who feel they do not have a voice and are not being taken into consideration regarding growth and planning.

Transportation and accessibility in District 1 are issues Calixta named.

“Some people think GoGEO is empty all the time, but there are people who ride it,” she said. “They get to work on it; they get groceries and see the doctor.”

Calixta said there are things in District 1 that can be improved on and added she is concerned about the city’s energy.

“I’m pretty sure the new manager will do us right,” she said.

Stevie Jones said she is running for Georgetown City Council because a voice that truly represents the dynamic and changing demographics of District 1 is needed.

“I am a lifelong resident of the area; my own parents were married in the gazebo at San Gabriel Park; I learned to swim in the Blue Hole, and now I am raising a family here,” she said. “The things I looked forward to having my children enjoy are slowly disappearing, and that makes me sad. I believe that change can be a good thing. Growth is inevitable, but I also believe in honoring the deep roots of history that have made Georgetown what it is.”

Jones said she wants to bring accountability, transparency and integrity back to City Hall.

“I am running to be a voice for those of us in District 1 who are hardworking citizens that don’t often feel like we are truly represented,” she said.

'What is your vision for quality economic development in Georgetown?'

Jones said the city has a lot of growth along with potential for new growth, but it must be reflective of the citizens in the district and those coming in the near future.

“We need to be smart, be held accountable and be transparent before anything is planned,” she said. “We need to make sure we are opening up conversations through public town halls and listening to the citizens—their concerns and opinions—and take those to City Hall to represent the people we work for.”

Fuller said the fast-growing development of Georgetown is well known.

There is a critical balance between development and the preservation of historic assets that must be sought, Fuller said, listing the charm and character of Georgetown as an example of what needs protecting.

Calixta said a conscientious balance is part of her vision for quality economic development in Georgetown.

“Wolf Ranch is the greatest thing, but Wolf Crossing ... how?” she said. “If right now we’re having issues with our transportation, why would we open that space up? How are we going to get out when it’s rush hour, when already we’re seeing our transportation on [Hwy.] 29 stressed?

More grocery and retail stores on the southeast side is a change Calixta would like to see, she said.

'What do you believe is the biggest infrastructure gap facing your district in Georgetown?'

“There are people who live two, three families to an apartment because they can’t afford a house,” she said. “If you’re single, it’s hard to rent here.”

Jones said accessibility is her biggest concern, as the basic foundations for getting to and from everyday places are missing.

“We need access to common basic needs—groceries, possibly a drug store,” she said of District 1. “With [FM] 1460 being a major road, we need to have safe mobility, whether it be in vehicles or on foot.”

Jones said smart-signaling traffic lights and roundabouts should be researched along with sidewalks or bike and walking lanes.

“In a lot of areas, there are absolutely no sidewalks, no shoulders, and a lot of our citizens—including children—are being forced out into the street,” she said. “That’s just not safe.”

“We’ve got to look at the cost of some of the transportation we’re supplying now,” he said. “Yes, the GoGEO is a nice service, but the lanes that run through the District 1 area are costing $42 per person per ride. It was projected to be $12. So we have a problem: not enough ridership, too much infrastructure cost. ... I hope we would take our money and spend it more wisely.”

The city is currently looking into a ride-share program that would provide vouchers and point-to-point service, which could be a better solution, according to Fuller.

“I think the GEO bus line is not ever going to work here because of our population,” he said.

'How do you see Georgetown monitoring land use to ensure housing meets the needs of the workforce here?'

People who have regular jobs are having a hard time buying a house in Georgetown, Fuller said.

“We need to provide the right incentives to developers and the people to get the kind of houses we need,” he said. “You can do that if you get everybody together. ... You can really build some nice quality homes. They’re not going to be $300,000, but they’re going to be houses people can afford and take pride in ownership.”

Calixta said while serving on the housing advisory board she asked city officials about codes and how they are being revised.

“District 1 is a mix of different housing,” she said. How does the code fit to these houses? Could we do variances to bring in tiny homes or something where people, students, could afford to live?”

Jones said the city can monitor land use for future development by working with home builder associations and paying attention to the demographics that come in.

District 1 has a variety of housing, she said, including original historic homes and brand new townhouses.

“I think it’s a great, unique area to bring in more diverse types of homes,” she said.

The topic of affordable housing has many layers, and there should be more public education on the matter, Jones continued, adding the city should host town halls on affordability and home ownership.

'What is the biggest concern you have heard from businesses, and how do you plan to address these concerns?'

“We’re seeing so many original business owners being priced out of their businesses, and that is truly sad,” she said. “ As time goes on, rent, mortgages, cost of living—it goes up. The City Council has a strong responsibility to make sure the cost of living matches the people that live here ... and a large majority of our residents are business owners.”

Fuller said the business owners he has talked to are concerned about approval processes taking too long.

"When doing a project, any delay is a disaster that affects budgets,” he said, adding he believes the process should be streamlined if a project meets codes and regulations.

“If there are projects we don’t have problems with, why do they have to stay in the process all that time? Go ahead and speed them on through,” he said.

Calixta said she has seen many businesses close during her time in Georgetown.

“We’ve seen a lot of buildings stay closed and not known what is coming,” she said. “I am concerned that maybe the economic development and business owners need to listen more to each other.”

Audience question 1: The City Council recently discussed the $1 million Bloomberg grant. What is your opinion on that grant and the city’s plans for it?

Calixto and Jones each said they were unfamiliar with the Bloomberg grant at that moment.

Fuller said he believed the city should have turned the grant down.

Audience question 2: The City Council requires four votes to get something done. How do you plan to work with your fellow council members to get your agenda passed?

Fuller said “not drawing lines in the sand” is important.

“All of these issues have so many sides,” he said. “There ought to be a way to bring a group together. You don’t have to say, ‘I’m on this side and you’re on that side, you don’t have the votes, you’re out.’ I think there are good ideas brought from both sides.”

Calixta said the question prompted her to think of her Republican friend.

“We argue back and forth, but at the end of the day I respect her, she respects me, and I think the same should be on council—that respect,” she said. “Go back and forth, do your research and present your case.”

Jones said it is important to form a consensus, especially when working with people that have different views.

“As an educator for 11 years, I learned a lot of listening skills,” she said. “Every single day as a mortgage lender I listen to people’s hopes and dreams.”

She said this experience will help her listen to everyone and come together to create a plan, even when opinions differ.

Anna Eby resigned from Georgetown City Council on Aug. 2 after announcing her decision to move out of District 1. The candidate elected to fill the vacancy will complete the remainder of the term ending in May 2021.