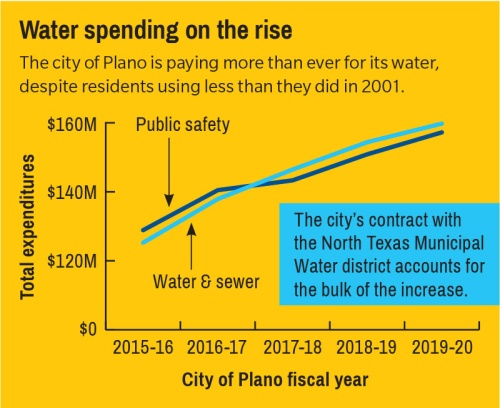 The city of Plano is paying more than ever for its water, despite residents using less than they did in 2001.

The city of Plano is working with 12 nearby cities to amend a contract that requires Plano residents to pay tens of millions of dollars for water they do not use.

Plano City Attorney Paige Mims said in a Sept. 5 statement that Plano is participating in settlement discussions regarding its contract with the North Texas Municipal Water District, as are many other cities served by the district.

Mims said she could not discuss details of the discussions because of a confidentiality agreement between parties.

The city mounted a challenge to the structure of the contract in late 2016 as Plano water and sewer costs were set to soon become the city’s greatest expenses, surpassing even public safety. The state’s Public Utility Commission has been reviewing the city’s request.

In Plano, however, water and sewer expenditures have risen by 27% in the last five years, outpacing growth in public safety spending by $5.5 million.

The water district supports the settlement efforts, provided the district can still cover the costs of maintaining the water system and expanding it to meet growing regional demands for water, a spokesperson said.

“Those costs must be funded regardless of the amount of water consumed each year, which fluctuates based on weather patterns and other factors such as growth,” NTMWD spokesperson Janet Rummel said.

The city of Plano has asked the Public Utility Commission of Texas to delay its consideration of the case until Dec. 13 as the parties work toward a settlement.

In the meantime, Plano residents continue to pay more for water even as they use less.

During times of drought, the city has occasionally set guidelines on how often, and on what days of the week, homeowners may water their lawns. Generally, these efforts have been successful, Plano Budget Director Karen Rhodes-Whitley said.

During the last two decades, Plano’s population increased by more than 20% while total water usage declined by roughly 30%, according to city records. However, water and sewer costs continued to rise because of the water district’s “take or pay” contract.

The district raises water and sewer rates primarily to pay for capital investments.

But because the cost of water Plano pays for stays the same regardless of how much it uses, the city ends up passing the water district’s rate increases on to consumers, Rhodes-Whitley said.

While some other cities use general revenue funds, which come from property and sales taxes, to subsidize the water portion of their budgets, Plano does not. The only part of the water and sewer expenses that Plano officials typically have control over is tied to personnel and city infrastructure investments.

But those personnel and infrastructure costs make up only 33% of total water and sewer expenditures each year, Rhodes-Whitley said, and they have remained fairly constant. The rest goes toward payment to the water district.

“We don’t have any staffing increases over there [or] infrastructure increases,” Rhodes-Whitley said of the city’s water and sewer operations. “We’re ‘pay as you go’ on water and sewer [investments].”

Plano’s negotiations with the water district and member cities come at a time when water rates are expected to continue to climb, although not by as much as in recent years.

Cities in the coming year will pay 2.4% more per 1,000 gallons of water than they did the year before. This is the lowest rate increase the water district has asked for since 2006, Rummel said.

That said, a quickly growing Collin County population is expected to require more water sources and infrastructure. The district’s openness to a change in the cost-sharing structure does not necessarily mean it can afford to take in fewer dollars overall, Rummel said.

“The district is open to a contract change as long as adequate funding is available to cover the costs to maintain, operate and expand the regional system the cities share and to cover any debt costs,” Rummel said.

But until such an agreement is reached, the city of Plano plans to continue to promote water conservation policies, Rhodes-Whitley said.

One of these measures, which charges residents a significantly higher rate for water if they use more than 20,000 gallons a year, helps dampen the impact of rate increases on residents who use less water, she said.

“The city of Plano believes that the lower tier should be as low [as it is] because you’ve got the senior citizens on those, the people who are living by themselves,” Rhodes-Whitley said. “We really built into the rate structure where, if you are using a bunch of water, you really are subsidizing that lower tier.”