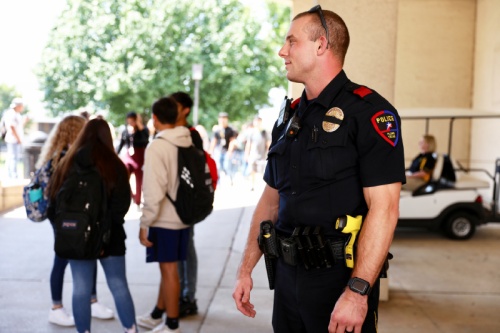 Plano ISD already checks many of the boxes for the latest requirements defined in the most recent state law on school safety and security.

Senate Bill 11 is a direct reaction to the Santa Fe High School shooting by a teenage student that left eight students and two teachers dead in 2018. The law, which partially went into effect this summer, is meant to reduce school violence and safety threats while making facilities more secure and mental health resources more accessible in schools.

“Texas must act now to make our schools safer, so I am declaring school safety an emergency item this session,” Abbott said at the State of the State Address in February.

In Plano Police Chief Greg Rushin’s 40-year career in law enforcement, the importance of having police officers in schools has grown, he said in a statement.

Plano ISD is optimistic that it is prepared to meet all of the requirements in the law by the appropriate deadlines.

“Our practice is consistent with what is required to be in the plan. We just don’t have some of it written down yet,” said Joseph Parks, executive director of Safety and Security at Plano ISD.  “We’re working on that.”

Some of the law’s provisions are waiting for guidelines from the Texas School Safety Center or Texas Education Association. One example is safety drills.

“Our package of drills that we require campuses to do every year, we think will probably exceed what the Texas School Safety Center pushes out,” Parks said. “But if it doesn’t, we’ll adjust it from there.”

PISD adopted the Standard Response Protocol, or SRP, drill procedures roughly five years ago. The program consists of four actions and verbal cues to respond to threats. Of the many protocol programs available, this program is one of the best that schools can get, Parks said.

“You don’t have an action just for an active shooter or just for a medical emergency or just for a fire,” Parks said. “You can take those four actions and use them for any type of emergency just based on what’s going on at that time.”

The program is now well-ingrained in the district, Parks said. Students have constant reminders posted around schools to help them remember the verbal cues for drills, according to Parks.

“Whenever I run into PISD kids, if it’s appropriate, I’ll catch one of them and say, ‘This is a test for your principal. Complete this sentence: Locks, lights,’” Parks said. “They almost always say ‘out of sight.’ They know the language.”

Schools are required to hold drills at certain times of the day. Last year, drills were added during passing periods and lunchtime.

Some changes to PISD safety have been structural, including the modification of all single-building campuses to the double-door entry system, the installation of additional security cameras and updates to the emergency announcement system to reach all campuses.

This will be the second year that students in ninth grade and above are required to wear ID cards around their necks. The goal is to create an immediate visual cue if someone is not supposed to be on campus, Parks said.

Random metal detector searches in classrooms and other areas of secondary schools were added last year as well.

Plano mom Doreen Simonian says the regular presence of police on campus makes it easier for kids to relate to officers and talk to them about possible issues, she said.

“Like Officer [Art] Parker, who is one of the SROs at the school, everyone knows him,” Simonian said. “Even if he’s not at your school, he has a presence, and the kids relate to him.”

Jana Hancock, the district’s director of Guidance and Education Services, said the district has already made improvements in this area.

“We had all of these things in place, or we were heading toward that end in the case of the threat assessment teams,” Hancock said. “So really, it’s just helped us to kind of shore up our processes.”

The district developed threat assessment team protocols last year and is planning to begin training campus teams this fall. Each team is required to have representatives from law enforcement, administration, counseling services and special education. PISD decided to also include a general representative for an added perspective, Hancock said.

Counseling services follow a multi-pronged approach with mental health, Hancock said. In classrooms, students are made aware of what mental health issues might be cause for concern, and are encouraged to tell a trusted adult.

Hancock calls students the first line of defense because they often speak to each other before reaching out to an adult. A majority of tips come from directly from students, and that number has increased in recent years, according to Hancock.

District staff are taught to recognize and respond based on the lens of trauma the student might have experienced, Hancock said. Trauma practices were added to existing training for suicide and bullying prevention as well as abuse reporting.

The district begins teaching personal and online safety in kindergarten and continues to address the topics in health courses in older grades.

The contents of the new law are not a surprise but rather a continuation of previous security items that failed to pass in other bills, Parks said.

The district is doing what it can to protect students, Simonian said, but she believes no one has all the answers when it comes to her children’s safety.

“I still have a feeling of uneasiness when they leave sometimes if I really think about it,” Simonian said. “But I think the school is trying to do what it can to ensure the safety of their students. But it’s a lot.”