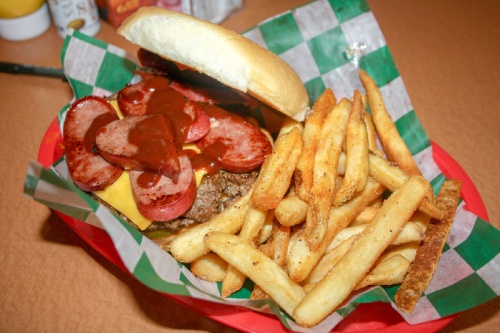 A cheeseburger is seasoned with house spices, served with onion and pickles, and topped with smoked sliced sausage and barbecue sauce for $11.99.

Andy Correa has been working in the restaurant industry since 1993, launching multiple ventures over that time frame. In 2018, he decided to set up shop in the town where he was born and raised, opening Andy’s Kitchen on Mason Road in Cypress in October.

“Everyone around here knows me, so if I’m going to put my name on something, then it’s got to be quality,” Correa said.

The eatery specializes in hamburgers, cooked to order with Angus beef and seasoned with spice recipes that have been devised by Correa himself and are sold in-house. Other menu items include barbecue plates, sandwiches and loaded baked potatoes. A breakfast menu offers wraps and omelets from 8-11 a.m. on weekends.

Aside from Andy’s classic cheeseburger, other burger options include the Cowboy Burger—a burger topped with smoked sliced sausage and housemade barbecue sauce—and the Wacky Burger, which is made with pulled pork.

“I’ve always enjoyed eating good burgers, so I took that and ran with it,” Correa said.

The walls of the restaurant are decked out with local flair that Correa said he has accumulated over his years in Cypress, including his framed football jersey from when he played for Langham Creek High School and hundreds of license plates donated by customers.

“Everything you see in here has a meaning,” he said. “I wanted to create that vibe of feeling at home, not like some of those chain restaurants you go to that don’t have any theme or any heart.”

On top of his extensive restaurant career, Correa also worked for more than 25 years as a supervisor over operations for Cy-Fair ISD. Today, he said he likes to cater staff appreciation events for the district. Andy’s Kitchen also hosts special events for churches and sponsors Little League baseball teams in the Fairfield area, he said.

Correa said he hopes to open a second, larger location of Andy’s Kitchen in Cypress within the next year, which he said would give customers space to host private events. In the meantime, he said he is going to keep giving his all at the Mason Road location.

“We call ourselves the small kitchen with a big heart,” he said.