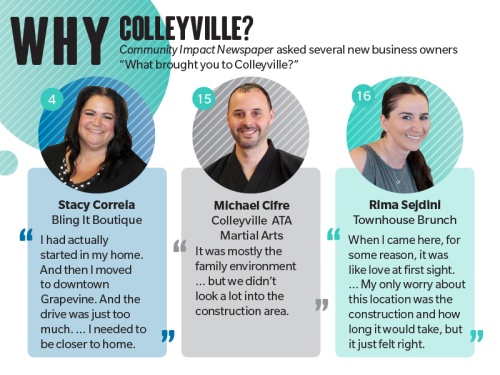 Community efforts to help Colleyville businesses along SH 26 will have to continue as construction on the corridor is running behind schedule, city officials said.

SH 26, also called Colleyville Boulevard, serves as the city’s main shopping corridor. The Texas Department of Transportation has been working since 2016 to widen the road. Along the way, multiple shops and stores have closed or relocated out of town as business has declined due to construction, store owners said.

But the Colleyville community has been trying to help. In 2018 the city began promotions to reward Colleyville shoppers. Residents have also formed groups to support local restaurants.

One sign that the community efforts are paying off is the influx of new businesses along SH 26. Over the past year the corridor has become home to more than 20 new shops, restaurants and facilities, according to data collected by Community Impact Newspaper.

“Everybody sees that this is the community’s commercial heart. They want to be here,” Assistant City Manager Adrienne Lothery said.

On July 2, TxDOT Engineer Minh Tran announced a new spring 2020 completion date for the SH 26 project. This is a six-month delay from previous construction timeline estimates.

“The contractor has experienced unforeseen utility and weather delays,” TxDOT Communications Director Shawna Russell said in an email. “The most significant utility conflict that delayed the project was an unidentified major city waterline north of Little Bear Creek.”

Council members emphasized during that July 2 meeting that the business corridor is suffering because of the construction.

“I want to make sure that [crews] are cognizant of what is going on,” Council Member Bobby Lindamood told Tran. “This is right in the heart of our town. And it’s hurting a lot of businesses. And I know they get to go home and go to sleep at night while our businesses are going home and stressing how they’re going to survive.”

Since construction began, a number of stores and restaurants have closed, including the Vineyards Antique Mall, Teddy’s Bigger Burgers, Chicago Signature, Crepes Bistro, and Taco Casa. Other businesses say they are also feeling the sting from construction.

“We have a guy that has bought a flower for his wife every single day for years,” said Rachel Williams, owner of the Colleyville Florist shop. “He stopped doing it for a while because he was like, ‘I just can’t get to your shop.’”

Construction has also been one of the hardest obstacles for Colleyville ATA Martial Arts to overcome since the school opened earlier this year, owner Michael Cifre said.

“About two weeks ago, all those entrances [in front of the shopping center] closed up completely,” Cifre said. “A lot of traffic kind of slowed down.”

A TxDOT mobility coordinator has been working to keep businesses along SH 26 informed of traffic updates and driveway locations, Russell said. TxDOT works with the city to post “Driveway” signs where access is available for businesses in the construction area.

“TxDOT also provides weekly project updates to the City of Colleyville, which are posted on their website,” Russell said in an email.

To help businesses through SH 26 construction, the city launched programs to bring more shoppers to Colleyville storefronts. The city began a Summer Sign Program, which gives grants to help make business signs more visually appealing.  The city also started a program designed to help property owners update storefronts. While the programs originated because of the construction on SH 26, they are open to all city businesses.

Last year, Colleyville had four programs to help stores along SH 26. These included two rounds of advertising grants, a partnership with local parent-teacher associations to collect receipts from Colleyville shops and a rebate program.

“The city of Colleyville has been really good,” she said.

Efforts to help the commercial corridor will have to keep going, Colleyville Chamber of Commerce President Carolyn Sims said. These efforts include the Colleyville Lunch Mob, which connects people to “mob” a local restaurant and support it with the chamber group. She also cited the Colleyville Eats Facebook group, which has amassed more than 1,900 members to support Colleyville restaurants.

“It’s important to keep people going into all of our businesses,” she said. “As we move forward, we might consider doing a gathering at our local retail stores, so ... they know that the community supports them.”

Help from the community took Townhouse Brunch owner Rima Sejdini by surprise after the restaurant opened at the Colleyville Town Center in May.

“I’m amazed with the Colleyville community and ... how connected they are,” she said. “Even with Colleyville Eats, following that and seeing how everybody is so positive.”

With more businesses expected to open along the corridor through the construction, the city is discussing SH 26 promotions for the latter part of the year and next spring, Lothery said.

“Whether it’s residents from a shopping perspective, the chamber from a networking and connections perspective, or from the city’s perspective, we’re all here to help [those businesses] become successful,” she said.

Renee Yan contributed to this report.
SHARE THIS STORY