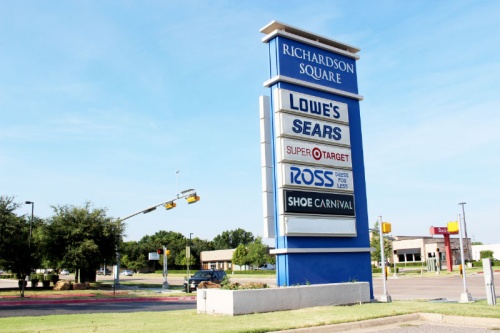 After sending developers back to the drawing board in early June, City Council unanimously approved a plan to revamp a portion of the former Richardson Square Mall site at Plano and Belt Line roads.

Under council's directive, ATR Corinth Partners met with nearby property owners in late June to gather feedback on the project. Over 70 stakeholders attended two meetings held June 27 and 28, according to architect Gerald Luecke with Hodges Architecture.

One meeting was specifically targeted toward the Berkner Park Neighborhood Association, a group whose president initially equated approving the plan to "signing a blank check."

In a letter to the city, the group expressed a renewed confidence in the project.

"Many of the retail businesses targeted for this [Sears] building are of relatively high quality for our area of Richardson," the BPNA letter said.

Plans for the Sears building include filling it with retailers and modernizing the facade, Luecke said. Proposed or targeted businesses include Hobby Lobby, Trader Joe's, Ulta, Sprouts and HomeGoods.

"Corinth is continuing to gain momentum in relation to leasing that building," he said.

Both Trader Joe's and Sprouts have said they are not currently expanding, according to the BPNA letter. Kroger's declined an offer from ATR and instead opted to remodel their store on Buckingham Road.

Council Member Kyle Kepner pointed to competition from the nearby Aldi supermarket and Target as reasons why residents should not count on inclusion of a grocery store tenant.

"It's probably not super realistic that that will happen," he said.

Displeased with what they deemed an unfinished plan, Richardson City Council members requested June 3 that developers return with a more defined vision for the defunct Sears building.

“What I would like to see is some kind of plan … for this Sears building before we approve the other items,” Council Member Steve Mitchell said at the June 3 meeting.

In terms of written correspondence, the city said it received 22 letters in favor of the project and 10 in opposition. It also received six neutral letters.

At the July 22 meeting, 28 residents showed up in support and 3 in opposition.

"Those opposed see this as simply a short-term benefit mostly for the developer and a long-term detriment to the city at large."

Others applauded developers for investing in what they called a neglected area of Richardson.

"Our community has heart, and now I feel like we have hope because we have somebody who has come along and offered some choices, and we haven’t had choices in a while," Duck Creek resident Nancy Day said.

The Sears building is only one piece of the overall plan. Also included are four new buildings ranging in size from 2,500-8,100 square feet. Drive-thru restaurants are intended for three of those buildings. One retail building fronting Belt Line is also planned.

"There is no guarantee or certainty that one of these entities might back out; those things happen," Mitchell said. "But ... it's a very impressive list, so my hope is that if [a tenant] falls out, they'll be able to put another one in."