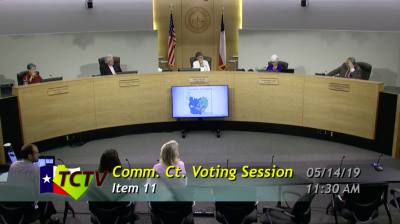 Travis County commissioners discuss an annual overview provided by the Office of Parental Representation at a meeting May 14.

Staff members at the Travis County Office of Parental Representation, or OPR, spent more than twice the number of hours on cases than private attorneys, according to an overview the office provided at a May 14 meeting of the Travis County Commissioners Court.

This discrepancy is partly due to the difference in assignments between OPR attorneys and private attorneys, OPR Managing Attorney Lori Kennedy said.

OPR was founded in 2009 as a specialized public defender’s office. It serves indigent parents—or those who cannot afford private counsel—who have had their children removed by the Texas Department of Family and Protective Services or who are at risk of having their children removed due to allegations of abuse and neglect.

In fiscal year 2018, OPR provided counsel to around 35% of these parents, or in 325 cases. The remainder of the cases are assigned to private attorneys contracted by the county.

OPR attorneys spent an average of 42.7 hours on each case.

During that same time period, private attorneys contracted by the county to represent indigent parents spent an average of 26.1 hours on each case. The minimum time spent on a case was 22.5 hours, and the maximum time spent was 29.6 hours.

Earlier this month, Travis County applied for a grant from the Texas Indigent Defense Commission, a state agency, that would allow it to create an all-purpose public defender’s office. Austin is the largest city in the country without one.

“I know my attorneys would love to be involved with [this new public defender’s office] because we’re such a small office. We’re so focused on this one area, and it’s a very difficult type of law,” Kennedy said. “I think it would really open us up to have other attorneys to bounce ideas off of [and] have other people with fresh eyes look at things.”

Similar to OPR, the proposed public defender’s office would handle around 30% of indigent criminal cases in Travis County, while private attorneys would provide representation in the remainder.

“We’ve seen both in anecdote and in study after study after study that these public defender’s offices tend to provide better representation,” TIDC Executive Director Geoffrey Burkhart told Community Impact Newspaper in March.

A 2018 study by researchers at Rand Corp. and the University of Pennsylvania Law School found a holistic public defense model—such as the one Travis County is proposing—reduces the likelihood of jail or prison sentences by 16% and expected sentence length by 24% compared to outcomes secured by private attorneys.

The TIDC will announce its grant awards in June.
SHARE THIS STORY