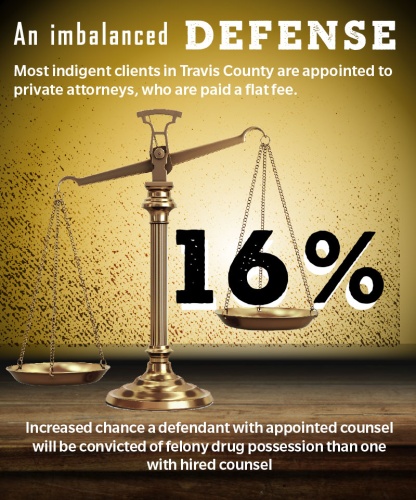 Most indigent clients in Travis County are appointed to private attorneys, who are paid a flat fee.

Austin is the largest U.S. city without an all-purpose public defender’s office to represent indigent clients, or those who cannot afford private counsel. After decades of piecemeal progress, Travis County is on track to change this.

Experts attribute this newfound momentum to an opportunity to fund the office through a grant, bipartisan support for criminal justice reform and increased activism.

The Texas Indigent Defense Commission, a state agency, provides grants to counties seeking to strengthen their indigent defense systems. Since 2001, the TIDC has helped establish 13 of the state’s 20 public defender’s offices.

A 2018 study by researchers at Rand Corp. and the University of Pennsylvania Law School found that a holistic public defense model—like the one Travis County is proposing—reduces the likelihood of jail or prison sentences by 16% and expected sentence length by 24%, leading to lower incarceration costs for local and state governments.

But challenges remain, including cost and pushback from private defense attorneys.

This fiscal year, Travis County allotted more than $137 million—12.58% of its budget—to corrections and rehabilitation. The addition of a public defender’s office would increase the county’s indigent defense spending more than a third, from $13.9 million in FY 2018 to $19.3 million in FY 2020, as projected in a TIDC feasibility study.

The deadline for the grant, which would cover half of the new office’s costs over four years, is May 10.

“Building a public defender’s office is not about saving money or efficiencies,” said Amanda Woog, executive director of the Texas Fair Defense Project, a nonprofit that advocates for the rights of low-income Texans within the criminal justice system, and chairperson of the county’s indigent legal services work group. “Both of those things can happen and, I believe, will happen. ... But this is about more than that.”

In 2001, the Texas Legislature passed the Fair Defense Act, which required the state’s criminal courts to adopt formal procedures for appointing lawyers to poor defendants and created what later became the TIDC to oversee the process.

Travis County has been working to improve defense for qualifying clients since at least 1971, when it created the state’s first juvenile public defender’s office.

More recently, in 2015, it replaced “bench appointments”—in which judges assigned indigent cases to private attorneys, raising concerns of favoritism—with a random system that is managed by the Capital Area Private Defender Service. It appoints private lawyers to represent indigent clients for a flat fee.

As proposed, the public defender’s office would handle 30% of those cases. Private attorneys, through CAPDS, would continue to represent the remainder.

Despite progress on the public defender’s office front, issues persist with CAPDS, including a problematic pay structure and overloaded attorneys.

“A flat rate creates perverse incentives,” said Chris Perri, a criminal defense lawyer and member of the Austin Criminal Defense Lawyers Association board who supports increased funding for CAPDS. “And that incentivizes speedily resolving a case instead of quality resolving the case.”

According to state-commissioned guidelines for indigent defense caseloads, attorneys should carry no more than 236 misdemeanors or 174 felonies annually to ensure effective representation—and fewer if the charges are more serious.

In 2018, the most indigent cases a private attorney in Travis County took on was 628, per the TIDC. Thirty-three of the 231 attorneys—or one in seven—contracted by the county exceeded the maximum caseload of 236; all had a mix of misdemeanor and felony cases.

Researchers at the Council of State Governments, a nonpartisan, nonprofit think tank, found in a 2018 report that, controlling for all factors that could impact  results, defendants charged with a drug possession felony were 16% more likely to be found guilty if they had been appointed an attorney than if they had hired one.


A work in progress

Its task is to explore paths to create a public defender’s office, improve CAPDS and reform the pay structure for appointed counsel.

But the group has experienced some setbacks.

In February, two members affiliated with the ACDLA resigned, citing conflict with activist members, a rushed process and inadequate funding for CAPDS.

In March, the group missed a deadline to submit a letter of intent to the TIDC, whose board ultimately waived the requirement. The group members were unable to come to a consensus regarding the letter in time, and local criminal judges refused to sign off on it.

Deborah Fowler, executive director of the nonprofit Texas Appleseed, which helped pass the Fair Defense Act, said this type of pushback was to be expected.

“In a lot of the places where we worked, the attorneys who were part of the appointment wheels were very concerned that if you created a public defender’s office, it would mean that they would no longer get appointed cases or at least [appointed enough cases] to continue to make a living,” Fowler said.

This fear is unfounded, Eckhardt said, because the county’s rapid population growth ensures there will be plenty of clients for private attorneys to defend.

Additionally, funding for a public defender’s office is intrinsically tied up in funding for CAPDS.

“We have to bring up the private defense bar on an appropriate pay structure at the same time we bring up a public defender’s office,” Eckhardt said. “The reason why it has to be simultaneous is because otherwise we will break the budget.”

While the startup costs of a public defender’s office are significant, even with TIDC funding, the potential savings are even greater—and could help offset the costs of paying private attorneys an hourly rate.

The work group is finalizing its grant application, which will detail what a public defender’s office would look like in Travis County.

Eckhardt said she is “extremely confident” its members will meet the May 10 deadline.

If created, the office would fit into a series of criminal justice reforms made at the local level, from the county’s jail diversion programs to the city of Austin’s Freedom Cities policies, which are intended to reduce racial disparities in discretionary arrests and to ensure police offices who ask about immigration status inform people of their right not to answer.

“Much of the reform efforts nationwide had been focused on either the back end, which is to say prisons, or the front end, which is to say pre-trial and policing and things like that, and has really skipped over that middle bit, which is prosecution and defense,” Burkhart said. “If you’re going to have criminal justice reform, you have to have public defense reform.”