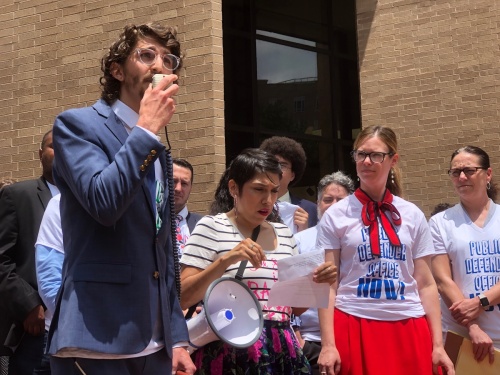 Updated May 9 at 12:30 p.m. to reflect that county criminal court judges have signed off on the TIDC grant application

Since October, a work group appointed by Travis County Commissioners has been crafting a proposal to create the vision of what a public defender’s office would look like for the county. Austin is the largest city in the country without a general public defender’s office to represent indigent clients, or those who cannot afford an attorney––which local political leaders hope to change.

The county passed a substantial milestone on May 7 as it continues through the process to create the new office. County Commissioners voted 4-1 to approve a grant application for $27.3 million in state funds over the course of four years that would enable the county to establish the public defenders office. Precinct 3 Commissioner Gerald Daugherty was the lone vote against.

The grant application will be submitted to the Texas Indigent Defense Commission––a state agency that provides start-up support for counties that want to establish a public defender’s office––ahead of a May 10 deadline. The TIDC will announce awardees in June.

However, the commissioners’ May 7 vote came with some late changes in the proposal. On May 2, Brenda Kennedy, presiding judge for Travis County Criminal Courts, submitted amendments to the Indigent Legal Services work group’s proposal on behalf of a majority of the Criminal Court Judges of Travis County.

“The judges agree to most of the ILS proposal, however, there are a few critical components of the proposal that we, as judges, have concerns about, based on our many years of experience in our system of criminal justice,” Kennedy wrote.

However, members of the county-appointed work group saw the changes from the judges in a different light.

“It undermines the work we have done to create a public defender office to serve community. It reeks of insider politics and is not based in principles and research, the foundation of the work done by the ILS work group,” members of the work group wrote in a May 3 email to commissioners.

Judges and members of the work group came to an impasse on issues including how oversight would work for the office as well as the amount of funding for the Capital Area Private Defender Service, or CAPDS, which appoints private lawyers to represent indigent clients. With those two groups at odds, County Judge Sarah Eckhardt proposed a third option in an amendment she submitted on May 3. The proposal as amended by Eckhardt was the one ultimately approved by commissioners May 7.

Eckhardt described her amendment as “punting” decisions regarding membership of the oversight committee down the road in order to submit the grant application on time. According to the text of her amendment, the oversight committee would include at least seven members, with representation from community advocates, criminal defense attorneys and jurists retired from the criminal justice system.

The judges' proposal split oversight into two phases––one committee overseeing the creation of the office during the four-year grant period, and another to oversee the office once it was up and running.

Amanda Woog, executive director of the Texas Fair Defense Project, a nonprofit that advocates for the rights of low-income Texans within the criminal justice system, and chairperson of the work group, said groups such as directly impacted individuals and family members should be represented in overseeing the new office at every stage of its creation.

Under the terms of each of the three proposals commissioners were considering on May 7––from the work group, local judges and Eckhardt’s amendment––the new public defender’s office would represent 30% of clients who cannot afford representation, while the remaining 70% would remain represented by attorneys appointed through CAPDS.

Initial projections for the total cost of this plan over four years was $40.2 million, according to an analysis by the county’s planning and budget office. The proposal commissioners approved on May 7, with more money allocated for lawyers in the CAPDS system, is expected to cost $54.3 million over four years, with $26.9 million funded by the county and $27.3 million funded by the TIDC grant.

“[The judges] believe the whole system has to be fair, and they are responsible for the whole system. They are not in favor of any proposal that only takes care of a portion of clients,” Hale said.

According to the amended proposal approved by commissioners, the county would spend about $16 million in fiscal year 2023-24 when the TIDC grant runs out. According to county staff, that is $4.2 million more than the current spending level of $11.8 million.

The TIDC requires local judicial support as a prerequisite to approve the grant application.

“If the judges aren’t going to sign it, the grant is not going to move forward,” Daugherty said.

Two days after the commissioners' vote, a majority of Travis County's criminal court judges signed off on the amended proposal.

"[U]pon approval and assurance that CAPDS will also be funded in accordance with the provisions outlines in the Eckhardt proposal, we will support the implementation of a [public defender's office] as ... outlined," Kennedy wrote in a May 9 letter to the TIDC.

Eckhardt said the grant application is not the end of the process, but rather an option to get over the hurdle of the impending TIDC deadline.

"I’m super pumped up. This is a huge institutional change," Eckhardt said. "If this was easy, we would have done it already."

Commissioners also made a decision on May 7 on how the funding for the new office would be split between the state grant money and local county funds. In other areas of the state, the TIDC has decreased its grant funding each year, starting by funding 80% of the office, then moving down to 20% by year four.

Rather than adapting that structure, county staff recommended a 50-50 split between grant funding and local funds each year because over the total four-year period the county would receive about $2.4 million in additional funding.

Some commissioners reiterated concerns voiced at their April 30 meeting about potential property tax revenue caps coming from the Texas Legislature and how those would affect new programs like the public defender’s office.

“I continue to be very, very nervous about the financial implications of moving forward on this thing,” Daugherty said. “I just am as nervous as I’ve ever been about our budget.”

Eckhardt said she recognizes and shares those concerns, but she still believes the public defender’s office is a worthwhile endeavor.

“It’s a huge risk. I think it’s a risk worth taking because we are talking about people’s liberty,” she said.

Geoffrey Burkhart, executive director of the TIDC, said the new funding split would likely not present any issues for the commission.

"That's certainly something we could entertain," Burkhart said.