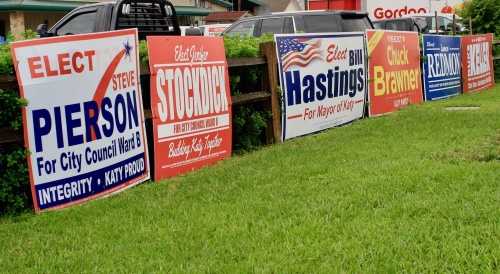 Bill Hastings is the new mayor for the city of Katy.

Unofficial results show the city of Katy has a new mayor.

Hastings—who could not be immediately reached for comment—has served the city in a public safety capacity for 43 years, according to the Dec. 17 letter announcing his resignation as chief of police. He had worked for the police department since 1986.

In the 2019 election, Hastings ran on a platform with many priorities. These included public safety, improving infrastructure, managing growth, expanding parks and recreations and improving communication.

“The growth of Katy is definitely of utmost importance,” he said in Community Impact Newspaper’s Voter Guide Q&A. “It affects absolutely every aspect of city services, infrastructure and mobility throughout the city. I have spent countless hours in conversation and in meetings as to the solutions for those issues and more.”

Additionally, Jenifer Stockdick was elected to Position 1 to represent Ward B on Katy City Council, a position held by Jimmy Mendez, who did not run for reelection.

Additionally, Frank O. Carroll III was elected to represent Ward A. He was unopposed. Carroll was appointed to the position in September after the seat was vacated by J. Gary Jones.