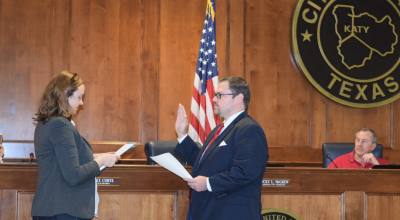 Carroll was sworn in immediately after the meeting by Assistant City Secretary Becky McGrew.

"The first thing on my agenda and on everyone’s agenda right now is the budget meeting in about 10 days,” Carroll said. “The meeting on Sept. 24 is, I think, a crucial discussion of the budget.”

Carroll said the budget this year is important because it will fully fund first responders in the city, including the addition of seven new police officers.

“That’s going to get our police force back to the level where they can actually patrol, as opposed to just running from fire to fire, which is important,” Carroll said.

Carroll said he believes it is time to keep on course with the city’s budget to fund drainage projects that are important to resident safety. He added that he felt the city had made some smart decisions by bringing in organizations such as Bucc-ee’s and Amazon which add to the tax base, allowing the city not to raise taxes for another year.

Carroll is an attorney and four-year resident of Ward A who has previously served on the city’s Board of Adjustments until his appointment to the City Council. He is also a member of the Katy Economic Development Council and the West Houston Association.

Mayor Chuck Brawner said he had brought multiple names to City Council for consideration when the need arose to fill the Ward A council seat. Per the city charter, the council had discussed those candidates and selected Carroll within the 20-day timeframe required by the charter.

The council also approved submission of a $3.7 million application for a Community Development Block Grant for disaster recovery to the Texas General Land Office, which is handling applications for federal Hurricane Harvey disaster relief funds.

Brawner said, now that the application has been approved by the council, the city expects to have it submitted to the GLO by Sept. 27. He said he is hopeful for a relatively rapid turnaround.

“However, we are still waiting for our Tax Day [Flood funds], so we’re hoping they’re moving a little bit quicker on that,” Brawner said.

He said any funds received as a result of the application would help with flood prevention measures and to assist low-income portions of Katy to continue recovery from Harvey.
SHARE THIS STORY