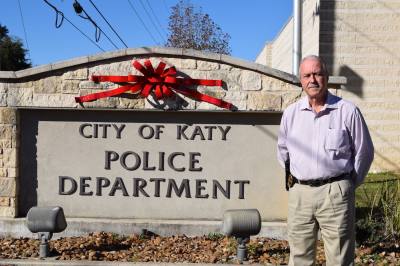 Katy Police Chief Bill Hastings submitted his retirement notification to the city Dec. 17. The retirement will be effective Jan. 15, and Hastings said he intends to run for mayor in the spring.

Katy Police Chief Bill Hastings submitted his resignation Dec. 17 and told Community Impact Newspaper on Dec. 20 that he intends to run for mayor in the 2019 election. Hastings’ retirement will be effective Jan. 15, he said.

“I’ve been thinking about this for a long time,” Hastings said. “I’ve had a wonderfully remarkable career with the city of Katy, and [the Katy] Police Department has been great.”

Hastings said he expects Assistant Police Chief Tim Tyler to be named interim chief of police, and he hopes that the city will name Tyler as his permanent successor. Tyler has been with the department for more than 20 years, and has been assistant chief for about 10 years.

Hastings decided to run for mayor as a way of continuing to serve the Katy community, he said. His intent is not to run against Katy Mayor Chuck Brawner, but rather to run for the office as an opportunity to continue serving Katy, he said.

“I am not ready to give up my commitment to the city—it’s what I want to do,” Hastings said. “I want to remain involved in the community and try to continue to make it a great place to live.”

One of the main focuses for his mayoral race will be to preserve Katy’s small-town charm and try to bring newcomers to the city into the community so that everyone is working toward the same goal of building a community everyone can be proud of, Hastings said.

Katy Mayor Chuck Brawner said he found out about Hastings’ plans to retire Dec. 17 and about Hastings' intent to run for mayor Dec. 19.

“He’s had a long tenure in Katy, and as a police chief for the city he’s done a really good job for the city,” Brawner said.

Hastings and Brawner said they have known each other since the 1970s with both of them being involved in emergency services through police, fire and emergency medical services in neighboring agencies. The two have a great deal of respect for one another, Hastings said.

“I think this will probably be one of the most interesting mayoral races that the city’s seen for many years,” Hastings said. “I don’t remember Katy having a race that there has never been any conflict, and I don’t foresee any conflict with this one. We probably just have a few little different things that we’ve got some different views.”

Hastings’ five children were resistant to his run for mayor at first, but after discussing his need to continue to be involved and serve the community, they came around and now support his race, he said. His wife, Susan Hastings, who is the director of the Katy Christian Ministries Crisis Center that helps victims of domestic violence and sexual assault, fully supports his efforts to stay involved in the community, he said.

“I could not have gotten to where I am without her support, and she’s been my biggest cheerleader from day one,” Hastings said. “And she’s very involved in the community, so she understands what it’s all about.”

Hastings feels his legacy at KPD will be developing a culture in the police force where everyone treats their peers like family and nurtures one another to be successful, he said. One of the things he is proudest of is the way that he has seen his new officers grow and build their careers within the department.

“I have the utmost respect for Chief Hastings,” Harris said. “He has led the police department with a hometown, community-oriented approach to policing that as a resident, I want to continue in the city of Katy.” Hastings submitted this retirement notification to the city Dec. 17.[/caption]
SHARE THIS STORY

Katy ISD's board of trustees unanimously voted to approve the redesign of Katy Elementary School, located at 5726 George Bush Drive, Katy, at their Nov. 15 meeting.

According to the release, the group met for the first time on Nov. 29 to discuss a possible implementation of a community engagement plan.