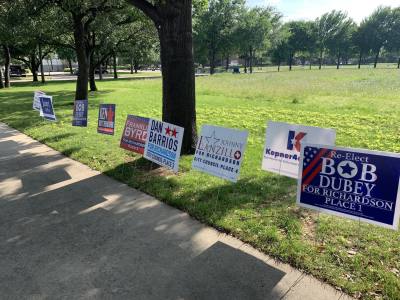 Richardson City Council will gain three new members as a result of this year's election, but the question of who will fill one of those seats will not be answered until next month.

One race will go to another round as none of its three candidates polled more than 50 percent of the vote. Dan Barrios and Janet DePuy were the top two vote-getters over Franklin Byrd in the race for Place 3 and will face each other in a runoff election on June 8.

Barrios said he is humbled by and grateful for the opportunity to continue his campaign.

DePuy and Byrd did not immediately return a request for comment.

Incumbent Bob Dubey, who faced newcomer Jason Clarke, will return for another term. By night's end, Dubey had polled nearly 60% of the vote.

"I'm very honored to represent the city again," he said. "I'm better because of the process [of running opposed], and I'm really excited because I got to run against a young man who ran a clean and honorable race and fought for what he believed in."

" I am just so happy that I’m going to be able to serve the citizens of Richardson," Hutchenrider said. I appreciate so much their faith and trust in me. I look forward to a very successful two years."

Incumbent Mayor Paul Voelker and council members Mark Solomon and Steve Mitchell ran unopposed and will all return for another term.

Meanwhile, the Dallas County Community College bond proposition passed by a wide margin. Passage of the bond authorizes the board of trustees to issue and sell $1.1 billion worth of bonds and notes. The money will be used for acquiring real property as well as the construction, improvement, renovation and equipping of school buildings within the community college district.

Two candidates are touting significant leads in the race for seats on Richardson City Council.

Place 1 incumbent Bob Dubey has about 58% of the vote over his opponent Jason Clarke, who has about 41%, with 13 of 29 precincts reporting.

Dubey, who has served on council since 2017, said he was grateful to have had the opportunity to run against Clarke, whom he described as a "very good opponent."

"We respect each and expect each other to do what is best for the city," Dubey said. "We had a very clean race, and we did that out of admiration for each other," he said.

"It's pretty obvious to me that Bob is going to take this one," he said. "I am excited for him but sad to be losing. He's an awesome man. I'll support him in any way I can."

Meanwhile, in the race for retiring Council Member Marta Gomez Frey's seat, Kenneth Hutchenrider, president of Methodist Richardson Medical Center, is leading with about 57% of the vote over his opponent Mauri Long, who has 43% with nearly half of all precincts reporting.

"Right now I'm feeling very positive and excited that the citizens of Richardson are putting their faith and trust in me to help continue the strong legacy of our city." Hutchenrider said.

Long said that while she is disappointed by the results, she found the experience of running for council to be valuable and hopes the new council will focus more on bringing stakeholders and residents to the decision-making table.

"I hope that at some point the small group of people will not have as much power in our city as they do now and that the residents will carry more weight," she said. "... I always have believed that the people who are responsible really need to reach out their hands and make other people feel welcome so that they feel they have some value."

The first round of election day results were posted around 8:22 p.m. So far, only 2 of 29 precincts are reporting. Early voting frontrunners from contested races have maintained their leads. They are Bob Dubey for Place 1, Janet DePuy for Place 3, Kyle Kepner for Place 4 and Kenneth Hutchenrider for Place 5.

The Richardson City Council is poised for change with the May 4 election.

The races for places 3 and 4 could result in a runoff in one candidate does not receive more than 50% of the vote.

The departure of three current members—Scott Dunn, Marta Gomez Frey and Mabel Simpson—means the makeup of City Council stands to change dramatically as a result of this election.

Meanwhile, early totals show strong support for the Dallas County Community College bond proposition, which would authorize the board of trustees to issue and sell $1.1 billion worth of bonds and notes. The money would be used for acquiring real property as well as the construction, improvement, renovation and equipping of school buildings within the community college district.

“Get ready, Texans, because our delicious chicken and biscuits are headed your way, and we can’t wait to serve you up some real deal, Southern flavor like only Bojangles does,” Bojangles Chief Growth Officer Jose Costa said.

In Dallas County, new cases of the virus totaled 112 on June 16.

Deep Cuts added 2,500 square feet to the shop by expanding into the vacant space next door.