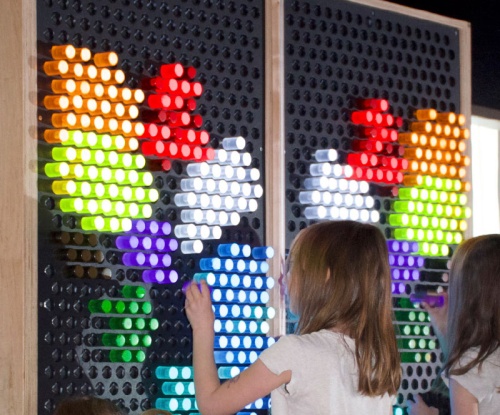 Visitors engage with hands-on exhibits in the Light Lab.n

When Thinkery opened at the Mueller development in 2013, it launched a new chapter in its decades-long history.

Founded in 1983 as the Austin Children’s Museum, the organization was originally based downtown and operated as a conventional resource for families in the area.

When the museum rebranded as Thinkery and moved to a 40,000-square-foot building in East Austin, however, there was “a definitive switch,” CEO Patricia Young Brown said. The organization began operating under a hybrid model that combines elements of a science center with a more traditional children’s museum.

Thinkery incorporated learning around science, technology, engineering and math subjects in its exhibits. It expanded the ages it serves to include older children—up to age 11 rather than children age 6 or younger—and designed exhibits to help children both develop problem-solving skills and discover new interests.

“The whole idea is that we’re not teaching content, right? We’re teaching exploration,” Brown said. “There’s no right way to engage in anything; there’s just engagement.”

Visitors can create pipelines through which to send a ping-pong-sized ball careening or explore their shadow in front of a multicolor screen in the Light Lab. They can float a beach ball over an electric air blower and make their own stop-motion animation sequences.

Rather than teach a right way for children to complete an activity, Thinkery encourages inquiry-based play.

“It’s about creating their own version of whatever the activity is,” Brown said.

To serve as many children as possible, Thinkery works to make its space welcoming for all, providing sensory-friendly hours for children who have autism spectrum disorder and hosting a community night on Wednesday evenings, during which admission is donation-based.

Before starting at Thinkery, Brown served as CEO of Central Health, which provides health care to low-income residents in Travis County. There, she learned how critical access to education was to one’s quality of life.

In her role at Thinkery, she is able to help bolster this access.

“It’s really working with families and children to make sure you’re supporting them to have the kind of life that they want to create,” she said.

The museum also hopes to establish a pathway for children who may not see themselves represented in fields such as engineering or technology.

“If we’re going to have the workforce of the future, then we have to capture children and families now and say, ‘This is a place for your learning, [and] there are areas of learning that you can be engaged in, too,’” Brown said.

“You have to lay a path for learning.”