Proposed bullet train could offer quick trip to Houston by 2025 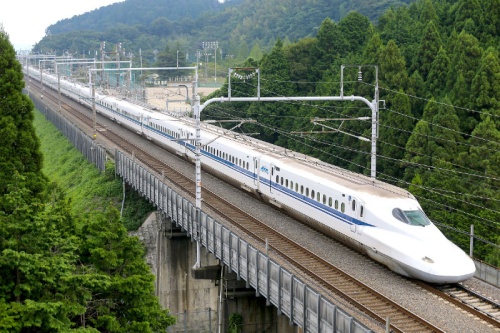 Texas Central Partners is proposing to use the Japanese N700-I bullet train, which is capable of traveling over 200 miles per hour.

Richardson resident Chip Pratt often travels by plane in his role as a telecom professional, but the prospect of a high-speed train between Dallas and Houston means he could spend less time in the air by 2025.

“Air travel has become very cumbersome,” he said. “Between shrinking seats, security lines and the cost to get to and from the airport at both ends, I think the train will be a very attractive alternative, particularly since it will terminate in Houston much closer to common destinations than the airport.”

First announced in 2012, the train would travel as fast as 205 miles per hour, delivering commuters from
Dallas to Houston and vice-versa in 90 minutes. It would be the first high-speed rail line in North America, according to officials with Texas Central Partners, the private group developing the project.

But even as the company nears its targeted groundbreaking at the end of this year, there are still several hurdles to overcome. The company is waiting for approval of two federal permits before it can begin construction, Vice President of External Affairs David Arbuckle said at a Jan. 16 Growth & Mobility Luncheon hosted by the Richardson Chamber of Commerce.

“This is the future,” Arbuckle said. “If you know anything about transportation in Texas, you know that we don’t have enough money for the transportation needs we already have.”

But before Texas Central Partners can begin construction, the Federal Railroad Administration must approve the company’s environmental impact statement, and it must still acquire the remaining land along the route. Bills under consideration by the state Legislature could also derail plans for the train.

Cities, including Richardson, have rallied around the project, which officials said could generate significant economic development.

Bullet trains are job creators, said Chris Wallace, president of the North Texas Commission, a public-private partnership dedicated to advancing prosperity of the region. The project is estimated to have a $36 billion economic impact, or the equivalent of hosting 180 Super Bowls, Wallace said.

“The bullet train will help connect the larger workforce centers,” Wallace said. “... We have to have all the tools in the tool chest for business people, individuals and consumers. ... And the bullet train is a major part of that plan.”

The train would dock in the Cedars area near downtown Dallas, but workers across the region stand to benefit from an additional mode of transit, Richardson Director of Transportation Mark Nelson said.

“Certainly there have been some concerns with logistics. … But the overall benefit of providing a fast, efficient, safe mode of transportation … clearly that is a benefit for the traveling public,” he said.

And then there are the more subtle effects, such as traffic congestion relief. The population in Texas is growing, and with more people comes the crowding of major interstates, including the oft-traveled I-45 between Houston and Dallas, Nelson said. Traffic fatigue and the ability to catch up on work or rest could lead some motorists to opt for the train, he said.

“We can’t do much in terms of building capacity on the interstate,” Nelson said. “There’s going to continue to be a level of congestion as the population continues to grow.”

CHOOSING A MODE OF TRANSIT

By the bullet train’s planned arrival in 2025, Richardson residents will also have better access to Dallas Fort-Worth International Airport via two stations on DART’s  26-mile passenger Cotton Belt rail line at the University of Texas at Dallas and the CityLine development.

Still, Texas Central Partners says the bullet train would have a leg-up on air travel, which requires passengers to endure the hassle of extensive security measures.

Texas Central Partners will still conduct security screenings of passengers prior boarding the train, said Holly Reed, the company’s senior vice president for external communications. But the federal security requirements for airports are not the same as those for passenger trains, she said.

“That’s good news for travelers, and that’s a differentiator for why people will ride the train,” Reed said. “Right now, you don’t have to go through the aggravating screening process that you go through within an airport.

“And there is security, but it is more passive. We have the ability to design the latest technology into each of the stations because they are being [newly] constructed. So we don’t have to retrofit post-9/11 like many airports did.”

When it comes to ticket pricing, Reed said it will vary based on market conditions and is expected to remain competitive with airline pricing.

“Fares will be variable depending on what is going on at the time and how the traveler booked,” Reed said. “Think about a hotel or airplane, for example. If you book in advance and you book in an off-peak time, you get a different price than if you fly … 7:30 Monday morning to Houston, and you booked it two hours ahead of time.”

As of March 15, Texas Central Partners estimated he mount of land it acquired for the project to be approximately 33 percent.

The company has acquired that land without the use of eminent domain, which is a legal process of requiring property owners to sell their land at a fair-market value for public projects such as constructing new roadways.

“Texas Central is both a railroad company under Chapters 81 and 112 of the Texas Transportation Code, and an interurban electric railway under Chapter 131 of the Texas Transportation Code,” the company said in a statement. “Texas has long granted eminent domain authority to railroads and interurban electric railways, such as Texas Central, as well as pipeline companies, electric power companies and other industries that provide the infrastructure necessary to serve the public efficiently and enjoy a healthy economy. Texas Central is building positive relationships directly with property owners, and any use of its condemnation authority will be a last resort.”

However, a court in Leon County ruled that Texas Central Partners is neither a railroad company nor an interurban electric railway—a decision the company says it will appeal.

“We respectfully disagree with the judge’s decision in Leon County and plan to appeal,” Texas Central Partners said in a statement. “We are confident that the laws of Texas irrefutably give this project authority to access and survey private land to help determine the high-speed train’s most advantageous route between Houston and North Texas.”

Before the target date for construction, the project will have to undergo multiple layers of federal approval.

Texas Central Partners must meet rules and regulations the Federal Railroad Administration has crafted specifically for the project, according to the company.

The company must also demonstrate that future construction and operation of the railway will not negatively affect surrounding neighborhoods, roadways or the natural environment. That statement is still in its draft version, Reed said.

Resource Environmental Solutions will ensure the rail line will be in compliance with the U.S. Army Corps of Engineers environmental requirements, such as restoring, enhancing and preserving the wetlands surrounding construction areas.