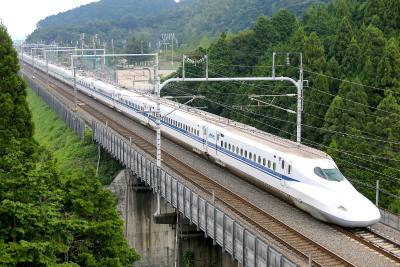 The proposed Texas Central project would use the Japanese N700-I bullet train, which can travel over 200 miles per hour.

Plano resident Greg Johnson is all too familiar with the trek from Dallas to Houston—making the long commute sometimes multiple times a month for medical treatment at MD Anderson Cancer Center.

Johnson has experimented with several types of transportation for his commute, from flying, booking a bus and driving, he said. And as someone who has traveled across Europe and parts of Asia where high-speed public transit is available, Johnson said he is all for any alternative means of travel.

Meanwhile, a private company behind a high-speed bullet train proposal that would offer a 90-minute transport from Dallas to Houston believes it has found interest in its future passenger base among Collin County residents.

But before Texas Central can begin construction, the Federal Railroad Administration must approve the company’s environmental impact statement, and Texas Central still must acquire the remaining land along the route. Bills under consideration by the state Legislature could also derail plans for the train.

And that project could serve as an avenue for small business owners in the area to tap into the market of one of the largest metros in the country, Plano Chamber of Commerce President and CEO Jamee Jolly said.

“If you’ve got a consistent mode of transportation available that would allow someone to efficiently have a second location, or have a presence in Houston or College Station, having that in place really opens up some opportunities,” Jolly said.

Similar to the development that came to Plano’s southeast corridor when Dallas Area Rapid Transit’s red line became operational, direct access to the high-speed rail station from downtown Plano could serve as a catalyst for redevelopment, Jolly said.

“You’re seeing plans being put together around the 12th Street station,” Jolly said. “[If]  they want to hop on the DART for the weekend, they can literally take the red line south, connect at Union Station from there, they’re going to be able to connect to the high-speed station … and be on their way.”

Jolly said she could see the widespread adoption of public transit easing some of the traveling woes of small businesses that rely on the use of public roadways.

“So if I’m an air conditioning company and I try to service all of Collin County, how do I do that most effectively and efficiently if there is congestion at certain peak hours?” Jolly said.

Johnson, the Plano resident who travels to Houston for medical treatment, says he sees the Texas Central project as being a potential answer to his monthly travel needs.

“It represents … an efficient alternative,” Johnson said. “My experience with flying is there is a tremendous amount of hassle associated with the ... process. With parking, security, ... baggage and weather.”

Texas Central will still conduct security screenings of passengers prior boarding the train, said Holly Reed, senior vice president for external communications at Texas Central. But the federal security requirements for airports are not the same as those for passenger trains, she said.

“That’s good news for travelers, and that’s a differentiator for why people will ride the train,” Reed said. “Right now, you don’t have to go through the aggravating screening process that you go through within an airport.

“And there is security, but it is more passive. We have the ability to design the latest technology into each of the stations because they are being [newly] constructed. So we don’t have to retrofit post-9/11 like many airports did.”

When it comes to ticket pricing, Reed said fares will be variable based on market conditions and are expected to remain competitive with airline pricing.

“Fares will be variable depending on what is going on at the time and how the traveler booked,” Reed said. “Think about a hotel or airplane, for example. If you book in advance and you book in an off-peak time, you get a different price than if you fly … 7:30 Monday morning to Houston, and you booked it two hours ahead of time.”

Texas Central has kept a close eye on its potential future riders by conducting a survey of frequent travelers, including those in Collin County, to better understand their preferred modes of transportation.

As part of its security plan and in order to meet federal requirements, Texas Central will also be training local first responders of the cities they are passing through, should emergency services be needed.

“We have in our plans training for first responders, and training along the alignment,” Reed said. “We are looking for any equipment that would need to be elevated.”

The rail will run along a combination of ground-level and elevated track, and will never cross a road intersection at ground level, Reed said.

As of this paper’s print deadline, Texas Central had estimated the amount of land it had acquired for the project to be approximately 33 percent.

Texas Central has acquired that land without the use of eminent domain, which is a legal process of requiring property owners to sell their land at a fair-market value for public projects such as constructing new roadways or oil and gas pipelines.

“Texas Central is both a railroad company under Chapters 81 and 112 of the Texas Transportation Code, and an interurban electric railway under Chapter 131 of the Texas Transportation Code,” Texas Central said in a statement. “Texas has long granted eminent domain authority to railroads and interurban electric railways, such as Texas Central, as well as pipeline companies, electric power companies and other industries that provide the infrastructure necessary to serve the public efficiently and enjoy a healthy economy. Texas Central is building positive relationships directly with property owners, and any use of its condemnation authority will be a last resort.”

However, a court in Leon County, which is northeast of College Station, ruled that Texas Central is neither a railroad company nor an interurban electric  —a decision Texas Central says it will appeal.

“We respectfully disagree with the judge’s decision in Leon County and plan to appeal,” Texas Central said in a statement. “We are confident that the laws of Texas irrefutably give this

project authority to access and survey private land to help determine the high-speed train’s most advantageous route between Houston and North Texas.”

Before Texas Central can begin construction, the project will have to undergo multiple layers of federal approval.

Texas Central must meet regulations the Federal Railroad Administration has crafted specifically for the project, according to the company.

Texas Central must also demonstrate that future construction and operation of the railway will not negatively affect surrounding neighborhoods, roadways or the natural environment. That statement is still in its draft version, Reed said.

Texas Central announced Feb. 4 it had named Houston-based Resource Environmental Solutions as its provider for ecological mitigation services. The company will ensure the rail will be in compliance with the U.S. Army Corps of Engineers environmental requirements, such as restoring and preserving the wetlands surrounding the areas of construction.

“These communities are getting top dollar for the land that Texas Central is buying from them, plus they are investing in their infrastructure,” Jolly said. “They are paying taxes on this land that’s going to take very little servicing 99 percent of the time, and they’re going to be able to use that money to go to other stuff.”
SHARE THIS STORY