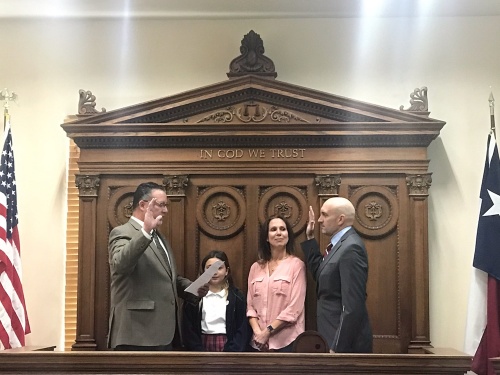 After a recount and a narrow 37-vote victory, incumbent Republican Lon Shell was sworn in as Precinct 3 Hays County commissioner on Dec. 18.

Shell, who served as chief of staff to then-Judge Bert Cobb for seven years, was appointed to the Precinct 3 seat in October 2017 after Will Conley stepped down to pursue a run for county judge. Shell’s term will expire in 2023.

Democrat Jimmy Alan Hall, who was Shell’s opponent in the runoff election, contested the Precinct 3 Hays County commissioner election, stating that some voters were disenfranchised while other votes that should not have been counted were.

Hall’s petition states that some Hays County voters were given provisional ballots when, according to Hall, they should have been given regular ballots. He stated that some voters were given the wrong ballots, meaning they did not have the option to vote for Hall.

Furthermore, Hall’s contest states that poll workers misdirected students who live on campus from voting at the LBJ Student Center on Election Day. He states that these voters were directed to vote at the Precinct 413 polling location on Thorpe Lane in San Marcos.

Hays County Election Administrator Jennifer Anderson told Community Impact Newspaper that she could not comment on the contest because it is now a legal matter. However, Anderson said she believes the election was sound, all voters were given the correct ballot and all valid votes were counted.

Shell has not yet responded to Community Impact Newspaper’s request for comment on the election contest.
SHARE THIS STORY