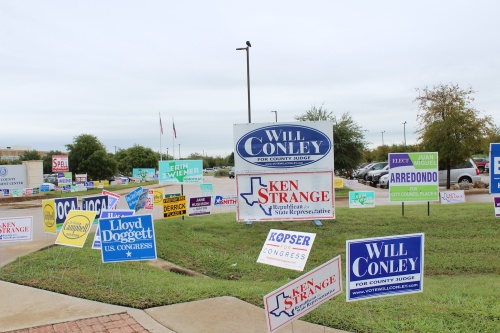 Update Nov. 20, 12:36 p.m.: Democrat Jimmy Alan Hall's request for a recount of the Precinct 3 Hays County commissioner race was accepted and will take place Nov. 26, according to the Hays County clerk's office.

According to the Texas Secretary of State’s office, a candidate has grounds to file for a recount if the difference in the number of votes received by the petitioner and the person elected is less than 10 percent. The office also states that there is no grounds needed for the call of a recount of electronic system results.

Local election offices have 48 hours from the time of the filing of a petition to approve it, deny it or to inform the petitioner that he or she filled the petition out incorrectly, according to the Texas Secretary of State’s website.

At an Early Voting Ballot board meeting Nov. 9 members sifted through provisional ballots and determined whether they were able to be counted toward the election. Board member Jon Leonard said members checked each provisional ballot to make sure the voters were registered in Hays County and had not already voted by mail. There were approximately 1,400 provisional ballots to consider, he said.

"Sometimes you'll get somebody that has filled out the form to request the mail ballot, and the elections office will have mailed them a mail ballot, and they come in and vote on election day, but at the polling place the registration records show we sent you a mail ballot," Leonard said. "So we will let you vote a provisional ballot on Election Day and then [the Early Voting Ballot board] will look to see if you did or didn't vote your mail ballot so you don't vote twice."

Hall said he is concerned that some provisional ballots that should have been counted were not.

“What I hope to get out of [the recount] is being sworn in as commissioner of Precinct 3 of Hays County,” Hall said. “I think some of the [provisional] ballots that were not counted should have been counted. I think I owe it to the voters as well as my supporters to make sure that we catch all the errors—we’re all human. We all make mistakes.”

Shell did not immediately respond to a request for comment about the potential recount.