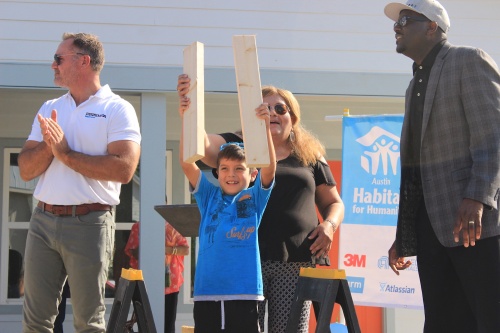 Jairdan Arriaga gestures for the crowd after a board cutting ceremony celebrating the opening of four homes in East Austin on Saturday, July 28. Habitat for Humanity and the Guadalupe Neighborhood Development Corporation donated the homes to families, including Arriaga and his mother, Rachel Seca.

This is the final story in a three-part reporting project on the changes East Austin’s neighborhoods have experienced.
Part 1: East Austin's voice reverberates on the dais
Part 2:  East Austin commercial development boom leaves business owners conflicted
You can find more information on how the project began here.

It’s a Saturday morning in East Austin, and 6-year-old Jairdan Arriaga is buzzing from house to house, ducking the crowd on Father Joe Znotas Street. In a few moments, Arraiga’s mother, Rachel Seca, will receive the keys to a new home–one of four energy efficient houses built through a partnership between Habitat for Humanity and the Guadalupe Neighborhood Development Corporation.

When the family moves, Arriaga will remain at Blackshear Elementary School. But Seca says if it wasn’t for this opportunity, Arriaga may have had to leave the school where he’s become so comfortable. The area where the family used to live, off of East 10th Street, was becoming unaffordable, and Seca had considered moving out of the neighborhood where she grew up.

“I’m glad he’s going to be able to go to the same schools that I went to,” Seca said.

In 2014, Blackshear became the first elementary school in Austin to offer fine arts programming. According to the district’s most recent demographic report, the school still falls slightly short of the school board’s target to fill  75 percent of the building’s capacity, but in four years, enrollment has jumped from 276 students to 380.

According to AISD, the drop in enrollment is largely due to cost of living increases pushing families out of the neighborhood while new development designed with younger residents in mind increases.

In March, University of Texas professor Eric Tang released a study entitled “Those Who Stayed.” In it, Tang showed that the total population in one neighborhood within East Austin’s 78702 zip code increased in population between 2000 and 2015 by more than 200 residents, but the percentage of residents 17 years old or younger dropped from 30 percent to 11 percent.

“There's an important social dynamic that is also lost when children are no longer prevalent in a neighborhood,” Tang said. “It accentuates the loss of community that people feel in general.”

As teachers in schools strive to meet their students’ needs every day despite dwindling resources, the district hopes modernized facilities and new programming can not only keep schools open, but maintain their vital connection to local communities.


The Weight of History

The hallways of Kealing Middle School bear the weight of Austin’s past. Once a school for black students when East Austin was the only part of town black residents were permitted to live, Kealing was closed in 1971 along with two other schools primarily serving black students, the original L.C. Anderson High School and St. John’s Elementary School–their students dispersed to schools around the city.

The school  reopened in 1986 with magnet program for students across the district as well as an academy program for students in the area. In the last few years, Coburn said teachers and administrators have worked to reduce the divisions between magnet and academy students–putting everyone in the same advisory and teaching math courses to students from both programs.

“Having the racial, ethnic, linguistic, economic and cultural diversity we have in our building forces us to really dig into issues of equity in ways that some people can avoid,” Coburn said.

Codified segregation is in the past, but economic segregation remains a reality in Austin’s schools. Across Austin ISD, 53 percent of all students are economically disadvantaged–or eligible for free or reduced-priced meals under the National School Lunch Child Nutrition program. At most of East Austin’s neighborhood schools more than 80 percent of students are economically disadvantaged.

“Austin is so incredibly economically successful, but the benefits are not equally shared and that puts people under a lot of pressure,” said Suki Steinhauser, CEO of Communities in Schools Central Texas.

Staff from Community in Schools work with kids throughout the school day individually and in groups, providing services ranging from individual crisis intervention to school supplies and meals. Steinhauser said the upheaval of moving is a growing challenge for children, and CIS has expanded its footprint accordingly.

“(Families) don't want to leave. They just cannot afford it,” she said.

For 19 years, Gabriel Estrada taught fifth and sixth grades at Zavala Elementary School. Now, he works with Austin Voices for Education and Youth, a nonprofit that collaborates with administrators and teachers to create educational programs at AISD schools.

Estrada’s family has roots in East Austin. He’s seen the gentrification and the falling enrollment numbers, but he’s still optimistic.

A part of that big moment is the $1.1 billion bond package Austin voters passed in November 2017 that will invest resources across the district’s public schools.

According to AISD Operations Officer Matias Segura, the bond will help design modern learning spaces in hopes of increasing enrollment, and during the modernization process, no schools will be consolidated.

“I think it's about being competitive. It's about making sure we provide our students with a great facility and it's a facility that parents want to send their students to,” Segura said.

Dr. Collette Pierce Burnette, the president of Huston-Tillotson University, is similarly optimistic. She believes the historically black college can serve as an intellectual heartbeat for the neighborhood and a resource to its schools.

Burnette said Huston-Tillotson is committed to increase recruitment of African-American men and students who speak English as a second language to its college of education, hoping to provide more future teachers who look and speak like the students they teach.

“Teachers are golden. That's where it happens,” Burnette said.

On a Friday morning in July, some of those teachers are knocking on doors in East Austin.

Eastside Memorial High School has hosted a neighborhood walk every summer for the last six years. Teachers, coaches and administrators meet for a cup of coffee in the library, then leave with an armful of bags containing information on the school’s programs and the new campus coming soon at the old L.C. Anderson High School at 901 Neal St.–paid for with $80 million in bond funding.

Six years ago, when the walk started, principal Miguel Garcia said he was out with about ten others. This year, he and band teacher Brian Benavidez leave in a line of cars, joining dozens of other teachers.

Gentrification in East Austin and the pressure on families to leave in a historically forgotten area –that is beyond the control of Garcia and Benavidez. What the Eastside Memorial teachers can do is recruit their students to come back—one door at a time.