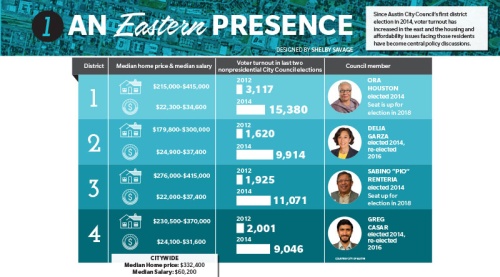 East Austin's representation at the polls has spiked dramatically since the institution of Austin City Council's 10-1 system.

This is part one in a three-part reporting project on the changes East Austin's neighborhoods have experienced. Check back on Wednesday for our story on the shifting business landscape in the area, and on Thursday for our piece on neighborhood schools responding to demographic changes. You can find more information on how the story began here.


City leaders point to shift in budget, policy priorities as representation east of I-35 grows

Today, Austin ranks as the best place to live in America and boasts a thriving job market, rapid development and continued population growth; however, the failure of that success to reach specific corners of town reflects a troubled past that remains more than peripheral for many leaders and longtime residents.

When minorities were coerced by the city government 90 years ago to move east of what is now I-35, it left a distinct seam down the center of Austin. As a result, East Austinites have endured generations of economic and racial disparities.

Amid its success, Austin continues to wrestle with equity. The east side has become a more attractive investment for developers, but gentrification increases. Property values go up, but so do taxes—longtime families are priced out and school enrollment numbers fall.

However, a new East Austin focus has impacted policy and budget priorities now that those east of the dividing interstate highway have a louder voice inside City Hall.

“Since [the city began district-based City Council representation in 2015] there has been an undeniable pivot east,” District 4 City Council Member Greg Casar said. “And an undeniable focus of the City Council away from just issues of the environment and developers toward social justice, equity and trying to create reparations for the past.”

That eastward pivot revealed itself in several major City Council decisions over the past year, Casar said. Council rejected a police union contract for the first time in its history after hearing demands from east side residents for more police oversight and transparency. Council’s vote to require all businesses to provide earned paid sick leave was aimed at the city’s lowest paid residents and service industry workers, many of whom live on the east side. The recent Freedom City policy is meant to reduce racial disparities in discretionary arrests and immigration status inquiries by police. Council also targeted gentrification with resolutions regarding tenants’ rights and rectifying the displacement of longtime residents; they then approved a workforce development strategy to ensure Austin’s economic success extended east.

This fall council will vote on a city budget that reflects priority changes in city spending. Since district representation began, funding for social programs has increased while the percentage of appropriations to the police department has dropped. Come November, taxpayers will vote on a $925 million bond proposal that includes $250 million for affordable housing projects and significant funding for east side cultural centers that have long evaded meaningful budget allocation.

City leaders, stakeholders and residents say absent a strong voice from East Austin, much of this would have been improbable—even impossible. Although struggles continue, they say the city is only in the first act of its momentum toward east side equity.


Addressing an inequitable past

Nearly all roads to Austin’s inequitable and segregated past lead back to that infamous decision 90 years ago.

“A City Plan for Austin, Texas,” the city’s 1928 comprehensive plan, addressed Austin’s racial issues by only offering city services to minority residents if they lived east of East Avenue—now I-35. Designed to squeeze the minority population into a “negro district,” the plan institutionalized racial segregation.

For decades, under an at-large system of government, Austin’s mayor and City Council seats were decided by a citywide popular vote. Central and West Austin—where voter turnout was highest—had a dominating electoral influence and thus resulted in little council diversity. Although a “gentleman’s agreement” in 1971 had the city’s major political influencers vow support to only minority candidates for the last two council seats, council members continued to primarily represent  Central and West Austin interests.

As the population in East Austin grew, so, too, did the necessity for a district representation system. By 2012, Austin was the largest city in the country without a district system, according to Austin Community College’s Center for Public Policy and Political Studies; however, attempts at change were defeated by popular vote several times.

After six failed attempts, Austinites in 2012 approved the switch to a 10-1 system of government—10 council members each elected by a district and one mayor elected by the entire city. The system delivered four council seats to East Austin and moved council elections from May to November to increase voter turnout. The inaugural 10-1 council took over in 2015.

Council Member Delia Garza, who represents the southeastern District 2, was among the loudest advocates for the district system. She said 10-1 has made a significant impact.

“It makes a difference to people when the person representing them drives the same streets they drive every day,” Garza said. “The average Austinite has a voice at City Hall, and I don’t think that was the case before.”

Before 10-1, Casar said council candidates never knocked on doors in his northeast district. Today, people have an incentive to listen to East Austinites, he said, which unearths different issues and priorities. This has resulted in a “significant disruption to the existing power system,” Casar said.

“Being able to campaign in a smaller area means you don’t need the nod from those kingmakers anymore,” Harris said.

If a majority of City Council members still required those endorsements, Harris and Casar said, the rejection of the police contract and passage of the paid sick leave ordinance and Freedom City policy would have been unlikely.

Garza and Casar said City Council has also taken a new strategy on public safety. Since 10-1 began, the percentage of the budget allocated to the police department has dropped and funding for social programs has increased.

The purpose, Casar said, is to address issues like mental health, drug addiction and homelessness so people need to call the police less often.

Adler said since 10-1, conversations about affordability and housing have taken center stage in city politics, and pointed to City Council’s support for the upcoming $250 million affordable housing bond.

“There is no question that having all parts of the city sitting at the table has changed the conversation on the council dais,” Adler said. “These conversations have been happening at breakfast tables all over the city for years, but now they are happening at council and they’re happening in ways they weren’t before.”

Longtime East Austin resident Mark Rogers, head of the Guadalupe Neighborhood Development Corp.—an East Austin neighborhood group that provided the land for the four  homes—said development  pressure has priced out all of his neighbors. He recently asked students at The University of Texas what came to mind when they heard “East Austin,” and one student replied, “Lots of nice boutiques.”

“Man, I never thought I would hear the word ‘boutique’ associated with East Austin,” said Rogers, who remembers when most homes east of I-35 had burglar bars on the windows.

Rogers and Casar said the bond money will attempt to slow the rapid gentrification but agreed there is a fine line between cleaning up an area for existing residents and making it so desirable that prices increase and exacerbate displacement.

However, the answer, Casar said, cannot be to do nothing. With East Austin’s voice now amplified in City Hall and the housing and affordability crises at the center of public discourse, he said solutions appear closer in reach than they once were.
SHARE THIS STORY