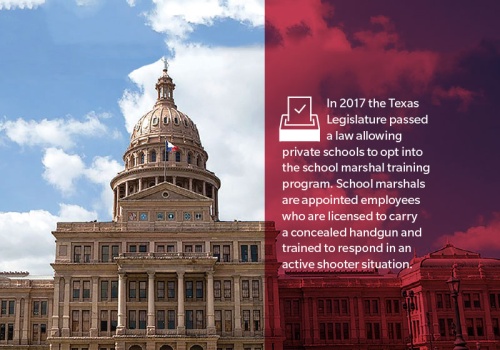 In 2017 the Texas Legislature passed a law allowing private schools to appoint armed school marshals, four years after allowing public schools to do so.

To be appointed as school marshal, a school employee must have a concealed handgun license and complete an 80-hour training course.

Laura Colangelo, director of the Texas Private Schools Association, was involved in drafting the law.

“Since passing it in [2017] and these tragedies that have happened since then”—including the Parkland, Florida, and Santa Fe, Texas, shootings—“I have gotten a lot more interest in the program,” Colangelo said.

For schools that are far away from law enforcement or cannot afford a full-time security guard, the school marshal training program may be a useful “tool in the toolbox,” she said.

Not everyone shares this view.

Gyl Switzer is the executive director of Texas Gun Sense, which advocates for evidence-based policies that reduce gun deaths.

As an alternative to the school marshal program, Switzer recommends that legislators pass gun-control policies and state agencies invest in a gun safety campaign in the vein of Don’t Mess with Texas, a statewide effort to reduce litter.

In addition to the school marshal program, other efforts are underway to improve school safety locally.

The Austin Regional Intelligence Center, a coalition of Central Texas public safety agencies, began working with the FBI and the Department of Homeland Security after the Parkland shooting, which left 17 dead, to develop a training program for school safety personnel to share best practices.

“In the information-sharing world that we work in, our first thought was to connect with local, state and federal partners to see what was already being done,” ARIC Director Lt. Matthew Greer said via email.

Collaboration is key to keep Texas students safe, whether among legislators or across agencies.

“When we talk about school safety, it’s everyone’s responsibility,” said Kathy Martinez-Prather, director of the Texas School Safety Center at Texas State University. “It’s not one principal. It’s not one teacher. It’s not one agency.”