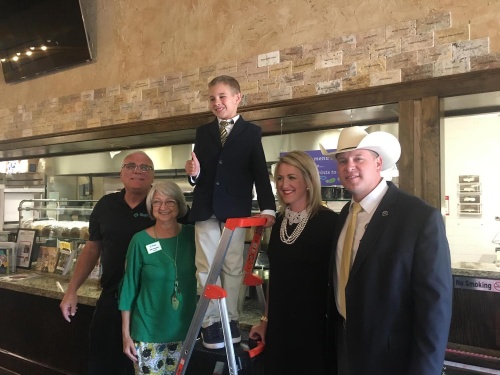 Wyatt Odom places his brick on the wall of donors after raising $500 for Hugs Cafu00e9.

On Aug. 22 8-year-old Wyatt Odom, placed his brick amongst 200 others on the wall of donors at Hugs Café in downtown McKinney.

Hugs has been offering training and employment for adults with special needs since 2013 and has also been accepting donations to expand programs and spread its mission, Founder and President Ruth Thompson said.

In 2015 the restaurant began thanking those who donated a minimum of $500 by mounting a brick with their names engraved on it onto the wall inside the café, Thompson said.

Wyatt’s mother Jennifer Odom said when Wyatt said that he wanted his name on a brick, his parents said that if he raised half of the money on his own, they would match the rest.

Wyatt raised $250 on his own by saving birthday and Christmas money and doing chores around his house, Jennifer said.

Wyatt requested a bright white brick so that it will stand out amongst the other bricks along the wall, Hugs founding board member Christ Thompson said.