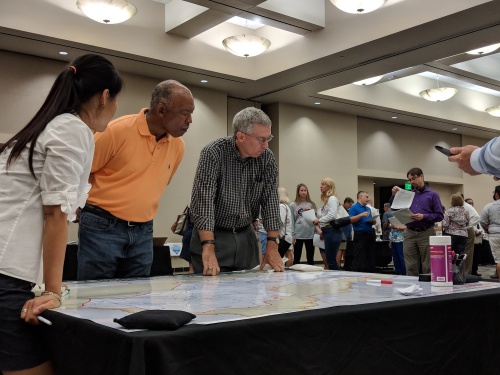 With early voting concluded as of Aug. 21, a total of 92,691 votes have been cast so far on the $2.5 billion bond referendum for the Harris County Flood Control District, according to tallies from the Harris County clerk's office.

A total of 52,604 votes were cast in person, and another 40,087 mail-in ballots were returned. About 68,000 voters are eligible to vote by mail in Harris County, according to the county clerk's office.

An estimated 58,000 voters cast early ballots in the November 2017 election, when several state constitutional amendments were on the ballot. A total of 150,174 ballots were cast after Election Day votes were tallied that year, which was about 6.7 percent of registered voters at the time, according to election archives.

The next four locations with the highest turnouts included:


Election day has been set for Aug. 25, a date chosen by Harris County Commissioners because of its significance as the one-year anniversary of Hurricane Harvey.

If passed the $2.5 billion bond would increase HCFCD’s annual budget from $120 million to around $500 million, officials said. About $868 million of the bond money would be used to obtain an estimated $2.4 billion in grant funding.

The bond would also require an increase in the property tax rate in Harris County. Officials with the budget office estimate the Harris County homeowner of a $200,000 home would see about a $5 annual increase to the property taxes they pay to HCFCD beginning in 2020. However, residents who are over 65 or disabled would not be subject to the tax increase.

A poll conducted between June 25 and July 31 by the University of Houston's Hobby School of Public Affairs found that 55 percent of respondents would vote in favor of the bond referendum. Only 10 percent said they would vote against it with 35 percent saying they were not sure how they would vote. The poll surveyed 815 residents by phone.

Read more about the types of projects that are slated to receive funding if the bond passes here.