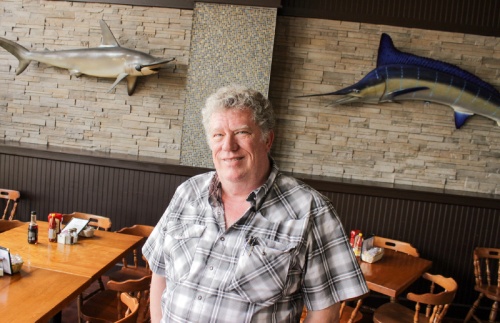 Jim Elrod, owner of Fishmongeru2019s Seafood near US 75 and Park Boulevard, has been in business in Plano since 1981.

Located near the Telecom Corridor along US 75, Jim Elrod’s seafood restaurant has seen its fortunes rise and fall with the dynamics of an ever-changing area.

Since opening Fishmonger’s Seafood in 1981 as a seafood market with a limited lunch menu, Elrod’s business has evolved into a full-service restaurant and bar.

The restaurant has moved buildings a few times but stayed in the general area of the US 75 corridor, Elrod said.

And the business’s success, he said, has been partly tied to that of the surrounding area.

“In 2001 we had the big dot-com bust. We lost a lot of our business on this Telecom Corridor,” Elrod said. “We finally started picking up and were almost back where we started by 2006.”

Fishmonger’s was Elrod’s first foray into restaurant ownership, one that he said he pursued essentially on a whim.

He used the money from selling his house to start the business. He had no accounting background at the time and had to learn how to run the business side nearly from scratch, he said. Nearly four decades later, the restaurant is still a US 75 fixture.

The restaurant, which Elrod said started out with a basic menu of seafood favorites, has evolved over time but still centers on simple, high-quality dishes, he said.

“We still sell a lot of shrimp and catfish,” he said.

But the restaurant’s signature dish, Elrod said, is the Pontchartrain. Named after a lake near New Orleans, the dish features grilled or blackened tilapia topped with sauteed shrimp and mushrooms.

For patrons who may just want to grab a drink and a quick bite, Elrod recently unveiled a bar menu with a pared-down list of the restaurant’s offerings. As of this paper’s print deadline, he also planned to unveil a lunch menu sometime this summer with a series of lower-priced specialties.
SHARE THIS STORY