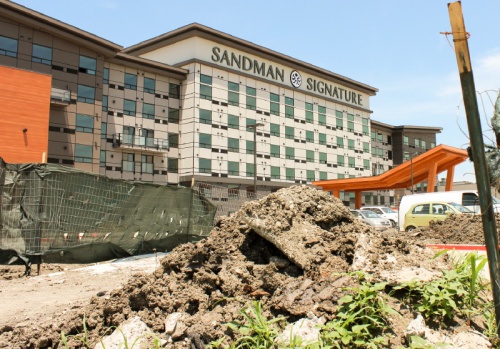 The Sandman hotel is in the final stages of construction in the Legacy business area, one of several hotels new to the area.

More customers than ever are checking into Plano hotels as the booming suburb becomes a greater focal point of corporate activity, industry data shows—but the rising tide of demand has not benefited every hotel equally.

That is because, since the start of 2017, the steady increase in Plano hotel room sales has been more than offset by a flood of new inventory. Six new hotels with a total of nearly 800 rooms have opened in the city since the start of last year, according to data provided by STR, a Tennessee-based analytics firm that researches the national hotel market.

The spike outstripped the steady growth pattern of sales and has resulted, for now, in a greater share of the city’s rooms sitting unoccupied. That could be a problem for existing hotel owners’ bottom lines if demand is slow to catch up with the area’s fast-paced construction activity, said Jan Freitag, senior vice president for STR.

“New supply in itself is not a bad thing [for Plano hotel owners],” Freitag said. “The question is, where do we think room demand will stand at the end of 2018? Will we be able to increase the number of rooms sold at a very healthy clip, like we have in the past [in Plano], or at a more moderate clip as this market’s maturing?”

Despite uncertainty for hotel owners in the near future, the occupancy rates remain high enough that the director of the city of Plano’s tourism-promotion agency sees them as an encouraging sign, given the heavy influx of new inventory that came online during the same time period.

“We kind of look at this as, well, as long as our occupancy [rate] is holding, that means we aren’t losing market share,” said Mark Thompson, director of Visit Plano, whose operations are funded through revenue from taxes on hotel room sales.

Revenues from hotel taxes were up last year in Plano, but the increases in demand and room prices that drove the rising revenues were less pronounced than the simultaneous growth in Plano hotel supply, according to STR. The average nightly cost of a room in Plano was $102.61 in 2017, up 1.8 percent from the previous year—lower than the annual inflation rate of 2 or 3 percent.

“It’s going to be very important to monitor this going forward,” Freitag said of the slow room rate increases in 2017. “Hoteliers need to be able to increase their top line, their revenue line, at faster than the pace of inflation, than their cost increases. Labor costs are always an issue. Energy prices are always an issue. Those always go up.”

In the early months of 2018, those room rate increases have been trending higher, up 5.3 percent from the first three months of 2017, STR’s records show.

The growth of the Legacy area is hardly the only factor that has prompted hotel construction—including for the prominent Renaissance hotel at Legacy West—to ramp up in the northwest part of town, Thompson said. A flurry of development has also occurred in recent years across the border in Frisco and in The Colony.

But the same regional factors that drove new hotel demand to Plano in the first place have also ensured some existing hotel owners have yet to reap the rewards.

Holiday Inn Express & Suites, a Plano hotel that opened in 2000 in the Dallas North Tollway corridor, has not seen the same demand growth that has come to hotels in other parts of the city, according to an executive with its ownership group.

“Plano saw the boom,” said Sonny Babu, chief operating officer of Atlantic Hotels Group, which owns the hotel on the tollway. “We didn’t see the boom, because the boom started to travel north and north into Frisco, and that became the center [of activity]. Once upon a time, it was [at]  Plano Parkway and Preston.”

A reason for that shift is the new headquarters and office buildings coming online in Plano and Frisco—a gold mine for nearby hotels, Babu said, since the new companies operating in the Legacy business area need places for their employees and guests to stay during conferences and other business activities. In this way, headquarters serve as a solid base for hotel market expansion, he said.

“Headquarters have to operate in good and bad [economies], and so investors are able to kind of bank on that,” Babu said.

The demand is expected to continue to rise in the coming months and years, Thompson said. Although employees moved into Toyota’s North American headquarters last year, there are still a number of workers who have yet to take their places in new Legacy West office buildings, including Liberty Mutual Insurance and JPMorgan Chase & Co.

“A lot of the corporate travelers aren’t even here yet,” Thompson said. “It’s important that we have a variety of hotel venues, from the higher-priced hotels all the way down to maybe a limited-service property or select-service property. … If we don’t have that product, then we’re not going to be able to answer the needs of the traveler, and that traveler’s going to end up going elsewhere.”

Even though some of the city’s existing hotels are too far away to benefit directly from economic growth in the Legacy area, developers like Babu are already eyeing the next economic cycle to build more. Atlantic Hotels Group is sitting on a piece of land near the Toyota headquarters, just waiting to see when conditions are right for the next wave of hotel construction.

“We are in the longest economic cycle, and while that has its own timeline, we know that the timeline for the hotel cycle is coming to an end,” Babu said.
SHARE THIS STORY