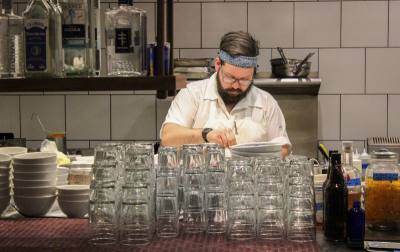 A cook prepares food in the kitchen on a Wednesday night at Lu2019Oca du2019Oro in the Mueller development.

Golden goose—that’s what proud parents Fiore Tedesco III and Katie Bender dubbed their baby girl when she was born with a shock of blonde hair—an anomaly in her brunette family tree.

But making the restaurant a gold-plated success took years of hard work in the industry, Tedesco said.

Before opening L’Oca d’Oro in 2016, Tedesco cut his teeth at Franklin BBQ, running the kitchen at Bufalina and got his start in Austin at La Condesa.

He said he remembers scribbling down ideas for the concept of L’Oca d’Oro, which first manifested as a pop-up restaurant with rock ’n’ roll album-themed dinners, in between running meat through the smoker at Franklin.

“It was really a cool challenge—really fun,” Tedesco said of the concept dinners.

Differing slightly from its pop-up forebear, the restaurant is an homage to Italian comfort food like the handmade pasta Tedesco grew up with in his second-generation Italian-American home.

Names of menu items are all in Italian, and Tedesco said his staff expertly guides customers through any questions they might have. He said the common thread that runs throughout the menu is an emphasis on simple ingredients and a respect of the cuisine.

All of the dishes—including the $17 Gnocchi al Sagrantino, with pancetta, marinara and fried onion—are sourced from small farms, mostly a “small circle” of local farms Tedesco works with.

In addition to paying close attention to the ingredients, Tedesco said he believes in fair labor and compensation at his restaurant, which is why a service fee is included with every tab and the tips distributed among all staff. The company also provides health benefits and paid sick leave, he said.

“We’re putting our money where our mouth is in ways that very few restaurants have,” he said. “We’re here; we’re open; and we’re successful. It can be done.”

Rigatoni alla Norcina ($16)
The rigatoni pasta is covered in a cream sauce with dried chilies and housemade pork sausage.

Casunziei Ampezzani ($15)
This ravioli dish is stuffed with beets and poppy seeds and dressed with mimosa vinegar.

A combined $8.5 million could fund clinicians' work along with training and ballistic vests in case of mass shootings