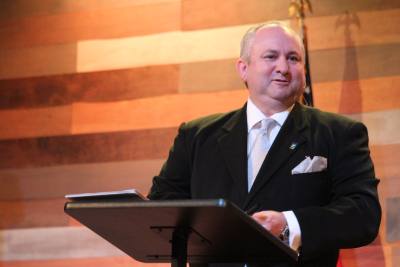 Leander Mayor Chris Fielder gave his final State of the City address in an event held by the Leander Chamber of Commerce at Hill Country Bible Church Leander on Jan. 30.

He announced earlier this month that he would not be running for re-election in May. During his speech, Fielder spoke about the city’s milestones—including new businesses, population growth and lower tax rates—from his tenure as mayor.

“Within a year’s period of time, we had a new mayor, a new city manager [and] a new fire chief, a new police chief all working together,” Fielder said of when he was elected in 2012. “We were watched very closely by a lot of people.”

Since then, the city’s population grew quickly, from 30,605 to 55,910 individuals, according to city data. The mayor said that during the same time frame, Moody’s bond ratings improved and the city’s land area expanded from almost 23 square miles to 36.79 square miles. Leander’s total expenditures more than doubled, rising from approximately $16 million in 2012 to nearly $35.6 million in 2018.

Now, he said, the city is working on a fifth. Fielder explained how 47 percent of the city’s budget goes toward public safety. Property taxes fund 46 percent of the city’s entire budget, while additional funding for city services comes from sources like grants, fees and sales tax revenue. In 2012, the city’s property tax rate was 67.042 cents per $100 valuation, and after lowering throughout Fielder’s time as mayor, was set as the effective tax rate at 57.7867 cents for fiscal year 2018.

Meanwhile, sales tax revenue increased by 78.45 percent, he said. Daytime jobs, like those on the way at Austin Community College, Holiday Inn Express, St. David’s HealthCare and the Texas Bullion Depository, will draw additional retail to the city, Fielder said.

The mayor advocated for a mix of housing types in the city, including multifamily, during his address, saying retail workers need housing that is affordable for individuals making $10-$12 an hour.

Fielder also announced his support of 2018 mayoral candidate Vic Villarreal during the State of the City address.

He thanked his family, friends, city staff, political advisor, City Council members and spiritual advisory team for their support during his time in public office.

“Now is the time for us to come together more than ever before, as a nation and as a city,” he told the audience. “I do not ask that you agree with everything I do or support, but I ask that you continue to pray that I do and we do what is right by God, pray for our president to lead our nation, pray for me and our council to lead this city.”