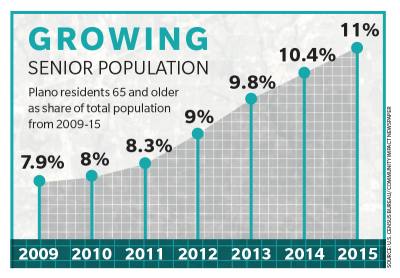 Plano’s population has been aging rapidly for years, leaving developers competing for a slice of the pie and city officials responding to a growing demand for services and facilities for senior adults.

The number of Plano residents who are age 65 or older has ballooned by roughly 50 percent since 2009, nearly 10 times the rate of growth for the city population overall. These growth rates coincide with similar increases in the number of seniors in suburbs throughout Collin County, according to U.S. Census data.

“Obviously, we’re going to have a significant increase in the number of seniors,” said Carr, who oversees the city’s development services departments. “It’s increasing now, and it’s going to continue to increase—a significant percentage increase.”

Some reasons for the trend are measurable. Life expectancy in the U.S. has been on a decades-long upward trajectory as mortality rates from the most common deadly diseases have declined, according studies from the Centers for Disease Control and Prevention’s National Center for Health Statistics.

In addition, city officials believe Plano residents are increasingly unlikely to move away from Plano as they age.

“Plano receives accolades that are reflective of our quality of life,” Carr said. “The people that have lived here for a long time, because of that quality of life that they have learned to enjoy in Plano, they have no reason to relocate or move out of their homes.”

And assisted-living communities have observed a significant portion of their clients move to a facility because it is near where their children already live, said John Trevey, owner of Uncommon Care, the company that operates Bader House Memory Care of Plano.

“Fifteen to 20 percent of our clients come to us because their kids live in the area,” Trevey said. “You know, Dad might be somewhere else, he’s not doing so well, [so] let’s bring him home and then place him in a better situation closer to us.”

For developers, this growing market for senior services has been too alluring to pass up.

Several prominent facilities have opened in recent years, including The Healthcare Resort of Plano, Bader House and the Village at Mapleshade. Developers have also brought forward bigger proposals like Mustang Square, a large mixed-use development with substantial senior-living components that failed to earn the approval of the Plano City Council in February.

This demand is driven by two major factors, Trevey said: the aging population and the income or assets of residents.

“The demand is the problem,” Trevey said, “because if you look at any sort of aging study, it shows that the number of older people in any market in America goes up tremendously year after year after year. And so somebody says, ‘Wow, that’s a market that’s growing much faster than our market. Let’s get into that.’”

The result of this growing demand for senior services, he said, is that the market for providers is volatile. Trevey’s Uncommon Care company used to operate 11 facilities across several states. Now it’s down to four facilities including the Plano location, all located in Texas. While his current locations are successful, he said, the others were crowded out by oversaturation in some markets.

“It’s just that the overall market goes through a rollercoaster,” Trevey said. “The assisted-living market is traditionally a vicious rollercoaster, much like apartments.”

There is another factor that makes the Plano area attractive for developers of senior residential and medical facilities, Trevey said—family income and asset levels.

When looking for a market for new facilities, Trevey said his company analyzes several demographic factors. Because Bader House serves adults with Alzheimer’s disease and dementia, the most probable areas to open a facility will likely have a high concentration of people age 75 and older, the most likely group to need memory-care services.

But Trevey’s company also looks at the income levels of the generation of children whose parents are likely to require these services—ages 55 to 64 years old. And the research includes how many competitors nearby offer similar services.

Plano residents, and residents of Collin County as a whole, tend to have higher incomes than residents in other parts of North Texas. The median household income in Plano is $85,085, compared to $51,411 in Dallas County and $60,373 in Tarrant County, according to the U.S. Census American Community Survey.

The aging population has implications for more than just developers. The city of Plano has for years witnessed the growth of the senior population, and a prominent facility catering to seniors has been strained to meet the demand.

The city on Dec. 6 began construction work to expand the Plano Senior Recreation Center after years of dealing with crowded parking lots at peak hours and rising demand for its programming and services, city Recreation Services Superintendent Susie Hergenrader said.

“We’re well aware of our aging community,” Hergenrader said. “It is the fastest-growing demographic in Plano, and we’re well aware of that. And that is one reason why we are making the changes at the senior recreation center: to accommodate a larger population.”

The changes to the senior center include an expanded fitness and weight room, additional classroom space, a larger dining area and more parking spaces.

The parking situation in particular has been problematic at times, Hergenrader said.

“Parking—oh my goodness, yes,” she said. “There are slow times and then there’s peak times at the recreation center, and during our peak times, parking is awful. It’s very crowded and seniors need close-up parking, so we’re expanding our parking for our seniors as well.”

The city has also begun to expand its offerings for senior educational programming beyond the confines of the senior center itself. For the first time, Hergenrader said, the city is launching a broad series of educational classes for older adults at recreation centers throughout the city. The new program, Growing Older, Always Learning, has been in the works for more than a year, Hergenrader said. The first classes began earlier this month at Carpenter Recreation Center.

As population demographics continue to shift in the city and Collin County, the city’s public and private landscapes are likely to continue to change as well cater to the aging population, said Carr, the deputy city manager.

“With that growth, the people that have lived in Plano for a long time, they love it here, the quality of life is what they’re looking for and they have no reason to move out,” Carr said. “And then with that, you’re seeing that increase in demand for that specialized care, the memory-care facilities, nursing homes.”
SHARE THIS STORY