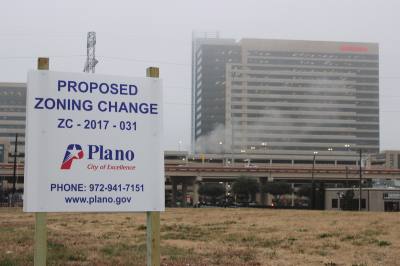 Plano Planning and Zoning commissioners approved plans Dec. 18 that would allow for the construction of a four-story hotel in southeast Plano near Richardson's CityLine development.

Plano Planning and Zoning commissioners approved a zoning amendment and preliminary site plan on Monday that move forward plans for a four-story hotel near downtown Plano.

The plot is across the President George Bush Turnpike from the city of Richardson’s massive CityLine development, which is home to State Farm and Raytheon corporate offices.

The approved amendment allows an increase of the maximum allowable height of the hotel from two stories to four stories.

The plot falls within the city’s “transit corridor” boundaries. The transit corridor includes plots of land surrounding existing and future Dallas Area Rapid Transit stations in south Plano, according to a document included in the proposed hotel application.

Plano Planning Director Christina Day said the location provides unique access to CityLine as well as DART stations. The plot sits in the southwest corner of the intersection of K Avenue and Plano Parkway.

Plans for DART’s future Cotton Belt Line, which will link downtown Plano to the Dallas/Fort Worth International Airport when completed, could have the potential to revitalize downtown Plano, Day said in a previous interview with Community Impact Newspaper.

“[The Cotton Belt] is basically a really unique opportunity to expand our downtown core to the south and … continue what we hope is a synergy between downtown Plano and CityLine station—revitalizing that southern K Avenue corridor in Plano,” Day said.

The Cotton Belt Line is projected to begin operation in 2022.

The approved site plans for the hotel will remain pending until Plano City Council decides whether to accept the zoning amendments approved by the planning and zoning commission.

David Martin and wife Linda McCall opened XO Coffee Company in 2017. They said the shop’s name is symbolic of the relationship they formed while sipping coffee together.