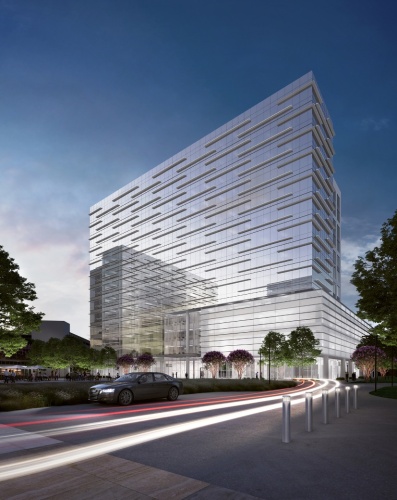 A 12-story office building is coming to the Heritage Creekside mixed-use development.

The developers behind Plano's Heritage Creekside mixed-use development plan to open the project's first office tower in roughly two years, according to a joint news release.

Rosewood Property Co. and the Patrinely Group on Tuesday announced the 12-story office tower, which will include 343,800 square feet of Class A office space in one of Plano's biggest ongoing developments. The property is located northeast of where Custer Road crosses President George Bush Turnpike.

"As you look at the evolution of the office customers, it's about where their employees are going to live, the availability of walkable amenities and covered parking—you hear this every single time," Rosewood President Bill Flaherty said. “We are very excited to be joining forces with Patrinely Group to bring our vision of office development to Heritage Creekside.”

The office tower will be the first building in Heritage Creekside's planned office quad, the anchor of the development's western employment center. Construction is already underway on the eastern portion of the development, which includes a mix of residential housing, stores and restaurants.

The developers on Monday received city approval to increase the number of single-family lots from 173 to 252, preserve more open space and concentrate the same number of apartment units into fewer buildings off Plano Parkway.