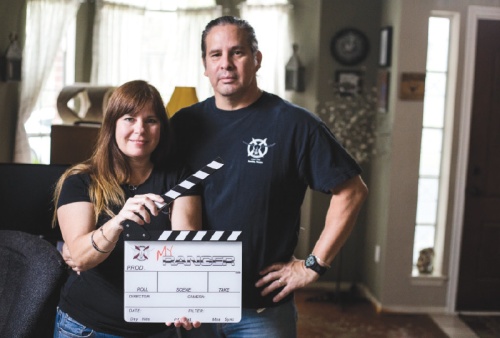 Lisa and David Reyes, owners of X Horns Productions, stand inside the companyu2019s office in their home in Northwest Austin.

Film producer David Reyes said he took a “leap of faith” in 2003 when he quit his full-time job to focus on his own business, X Horn Productions, alongside his wife, Lisa.

Fourteen years later, the couple premiered their second feature film, “My Ranger,” at the Austin Revolution Film Festival on Sept. 22, and nabbed three awards Sept. 23 at the awards ceremony.

“We basically live month-to-month and have bad insurance, but we’re doing what we love and we never know where we’re going to show up,” David said.

The film tells a coming-of-age story about a young man and his relationship with his first car, a Ford Ranger. The company also secured a distributor for its first and award-winning feature film, “Trippin’ to the Alter,” a romantic comedy about a couple hiring two prospective filmmakers to follow them during their engagement.

The success of the production company lies in its Northwest Austin roots, David said. The production of “My Ranger”—which had a small budget of $5,500—ran on favors from area businesses and their neighbors, he said.

All scenes were filmed at the Reyes’ home or in their neighborhood near Parmer Lane and Anderson Mill Road, including an auto repair shop on Parmer.

Although Northwest Austin does not yet have an established film scene, Reyes said he is amazed at the number of creatives he meets every day.

“There’s a bunch of musicians and a couple photographers on my street,” he said. “It’s weird who you run into at the mailbox.”