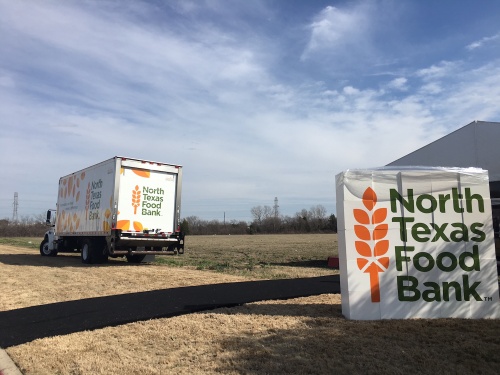 The North Texas Food Bank is opening a distribution and volunteer center in Plano next to Atmos Energy, 3697 Mapleshade Lane.

The North Texas Food Bank broke ground on its new Plano distribution and volunteer center today, which is located next to Atmos Energy, 3697 Mapleshade Lane. The new center, called the Perot Family Campus, will be 222,000 square-feet and hold up to 400 volunteers. The center will undergo construction this summer and is expected to be complete in late 2018. With the new center, the food bank will expand its operations to increase the number of meals distributed annually. The organization's goal is to distribute 92 million nutritious meals annually by 2025.

“We need 92 million meals today if we could get it,” Anurag Jain, NTFB board vice chair said at today’s ground breaking.

Today’s groundbreaking also marks the kick-off of a $55 million campaign: Stop Hunger Build Hope. As of today, over $40 million has been donated to the campaign.

In addition to the soon-to-be Plano distribution center, NTFB has a distribution center in Dallas at 4500 S. Cockrell Hill Road. A spokesperson for the NTFB said the Dallas center will remain; however, its functions and roles may change.
SHARE THIS STORY