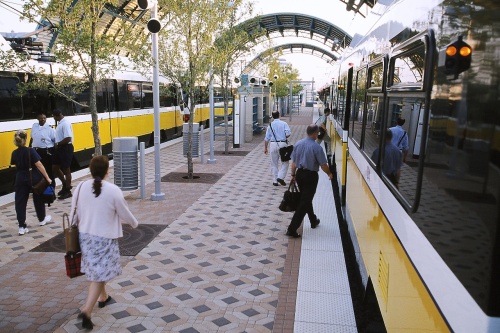 Plano's Parker Road station is one of several stations to receive enhancements through a grant from the Federal Transit Administration. A $1.4 million grant from the Federal Transit Administration to enhance bicycle and pedestrian accessibility along Dallas Area Rapid Transit stations could also help further the city of Plano's redevelopment plans around the Parker Road Station.

The FTA awarded the grant to The North Central Texas Council of Governments in October to improve regional accessibility to 28 DART stations. NCTCOG is partnering with DART as well as the cities of Plano, Dallas, Garland and Richardson to focus on this “last mile” accessibility as well as to address parking needs around these stations, according to a NCTCOG news release.

The NCTCOG is one of 16 organizations nationwide that will share the $14.7 million grant to improve public transit access as part of the FTA’s Transit-Oriented Development Planning Pilot Project.

Examples of grant-funded improvements include filling in missing sidewalks and making pedestrian crossings safer for rail station access, according to a news release. The second element of the plan is a study to help planners understand how parking is utilized in order to create more efficient transit-oriented development.

In 2006, the city of Plano published its Urban Centers Report, which outlined strategies for redeveloping area’s around the Parker Road Station into mixed-use transit-oriented space. In addition, the Plano Tomorrow Comprehensive Plan’s TOD policy encourages and incentivizes such type of development within walking distance of existing and future rail stations or bus transit centers.

The idea is to create an integrated mix of uses including residential, employment, retail and civic spaces, said Peter Braster, special projects manager for the city of Plano.

“This [policy] codifies the city of Plano's commitment to realizing TOD in our community and along the Red Line Corridor," he said. "The city of Plano supports this planning study and will actively work with NCTCOG, DART and the other municipal partners by participating in the plan advisory committee to use the results of the study to improve local TOD supportive efforts around our rail stations.”

DART has plans to extend the Parker Road Station's platform to the south, creating a pedestrian linkage with city-owned property at K Avenue and Park Boulevard, Braster said.

The farm consists of more than 200 acres and is one of Plano's largest remaining infill development sites, according to the planning department.
SHARE THIS STORY