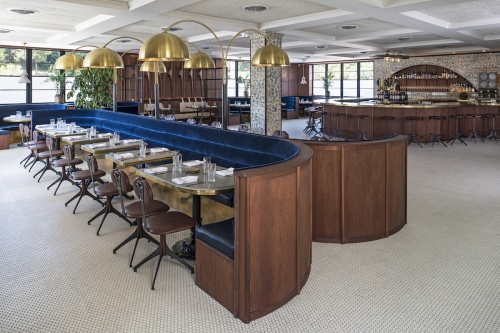 Twelve days after opening the bar section of its restaurant—called Cedar Tavern—the owners of Eberly on South Lamar Boulevard are opening the restaurant in its entirety Saturday, with dinner service beginning at 5 p.m.

Complete with a dining room, rooftop terrace and study, Eberly will serve contemporary American cuisine with modern twists on classic dishes, according to a news release. Everything is made from scratch with local ingredients. The release said some of the dishes served include tuna tartare, oysters and braised short rib with ricotta gnudi and celeric fondue. The menu is designed by Executive Chef Jim Tripi.

The dining room will be open for dinner starting Oct. 15, with breakfast, lunch and weekend brunch hours to follow.

Cedar Tavern, named after the same bar in the Greenwich Village neighborhood of New York City from which the 150-year-old hand-carved mahogany bar came, opened Oct. 3 within Eberly and serves classic cocktails and local craft beers.

Built in an old print shop, the 15,000-square-foot restaurant is named after Angelina Eberly, a local innkeeper who shot the cannon to scare away Sam Houston and his Texas Rangers and stave off a rebellion in 1846. The study connects Cedar Tavern to the dining room, serving as a coffee shop and co-working space by day and an extension of the bar by night.

The Eberly concept was created by Eddy Patterson and John Scott.

“Austin has always been a gathering place for risk takers and liberated thinkers to connect and feed off each other’s energy,” Patterson said in a news release. “We wanted to create something that reflected the craftsmanship, creativity and individualism that represents Austin, and we’re excited to contribute to that spirit and pay tribute to this great city’s legacy.”