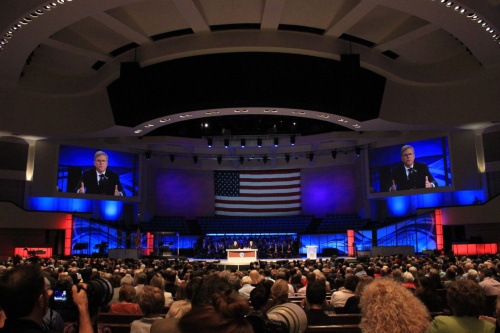 “What happens today could shape the future of our country,” said Pastor Jack Graham to the estimated 7,000 attendees who traveled from different parts of the region, state and country for the event.

People started lining up for the forum from 1 p.m. for the first-come-first-serve seating for the forum that started at 3 p.m. and lasted for four hours. Sponsored by Faith and Freedom Coalition and hosted by Prestonwood Baptist Church, this forum was a way of providing people a chance to listen to what the candidates had to say, said Graham, who also moderated the forum.

Each candidate had 10 minutes for their opening remarks, during which they emphasized their commitment to running for the GOP nomination while appealing to conservative ideals of mostly Christian audience members. Graham then asked each candidate their opinions and action plans regarding the status of religious liberty, national security and the sanctity of life. Every candidate on stage talked about how their personal faith influences them in  their personal and political life.

Other candidates from both the Democratic Party and the GOP were invited but only six from the GOP participated in the forum.

Summer Hoover drove from San Antonio to attend Sunday's forum in order to understand the presidential candidates’ platform in person.

“I was coming here not wanting to applaud just for the applause lines,” she said. “I just wanted to take in the information and evaluate it.”

Hoover said the presidential debates on TV appear to be more for the ratings, as many times the candidates avoid talking in too much detail about his or her policies. The Prestonwood forum allowed her to concentrate on each candidate’s platform and views on issues such as national security, religious liberties, international refugee crisis, economic development and sanctity of life, she said.

Hoover said she plans to track of what the candidates say in other forums and interviews, especially on a national stage in order to see which candidates remain consistent in their beliefs and policies.

“Its going to be good to see if they are consistent….or are they saying it just for their audience,” Hoover said, adding that she will be mindful of those candidates who might change their position based on the audience they address.

Brandy Ross said listening to the candidates’ views about faith was important for her. As a conservative, Ross said she wanted to see how the candidates perceived the idea of being president.