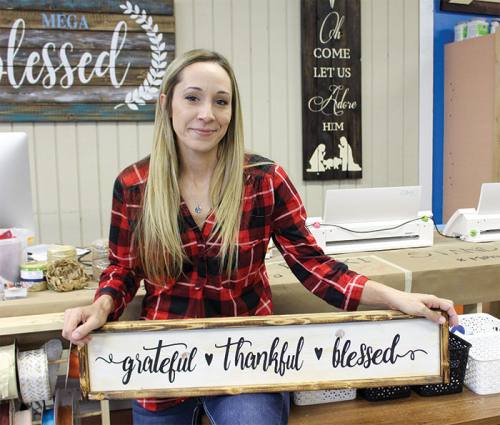 “I want to create a space where people can come, relax and spend some time here with their friends and do something they’ve never done before and leave feeling successful,” she said.

When starting the business, Manning said she was not versed in sanding wood or using a saw—skills she now teaches her customers—although she grew up in a family akin to crafting.

“I had a lot to learn, and I spent probably six months in my garage every night. When my kids would go to sleep, I would go out to the garage and practice and learn and be in tears sometimes because I couldn’t figure out how to do something,” she said.

At Junkin Gypsies, each finished piece is assembled from start to finish by the customer and features a custom design. In addition to pallet art, customers can choose from a variety of other projects, such as wooden door hangers and trays.

“I basically hand them a pile of wood, and they leave with something wonderful,” Manning said. “They’ll look at me and say, ‘I’m never going to be able to do this,’ and I understand exactly what they’re talking about because I went through that too.”

Customers can attend project workshops or a special event, such as complimentary wine events on Wednesdays, workshops for children and walk-in events. Most events require preregistration. The studio also offers off-site workshops to accommodate larger groups.

“Time and time and time again at the end of a class, a lot of the women that come in here come in just kind of tired and beaten down, and they leave feeling empowered,” Manning said. “That has been the best part of this journey in the past year.”